Japan’s former empress has heart problem but fine to travel 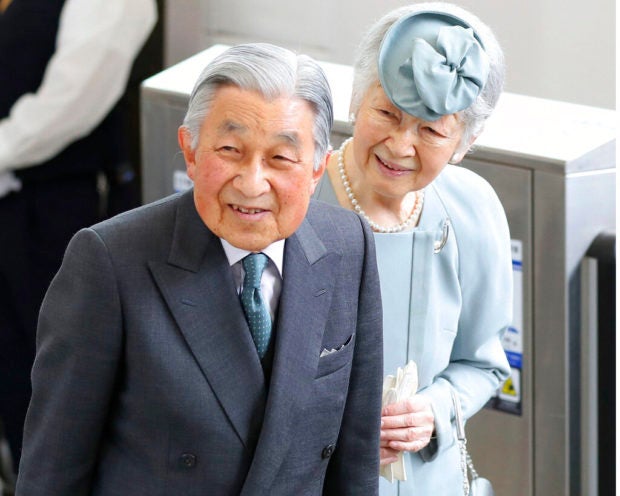 Japan’s former Emperor Akihito and former Empress Michiko smile as they board a bullet train bound for Kyoto, at Tokyo Station in Tokyo on June 11, 2019.  AP

TOKYO — Japan’s 84-year-old former Empress Michiko went ahead with a visit to the ancient capital of Kyoto on Tuesday after doctors said she has a heart problem but can continue her activities if her condition is checked regularly.
Michiko joined her husband, former Emperor Akihito, on the three-day visit as part of rituals related to his recent abdication.

Hundreds of well-wishers, some waving Japanese flags, cheered them as they arrived at Kyoto Station, with Michiko holding Akihito’s arm as usual.

Akihito smiled and waved back, while Michiko bowed to the crowd in a gesture of appreciation.

Akihito abdicated April 30, becoming the first emperor to do so in 200 years, and now holds the title of emperor emeritus. His elder son, Naruhito, acceded to the Chrysanthemum Throne on May 1.

Doctors on Saturday found that Michiko has heart valve abnormalities and an irregular pulse after a regular health checkup last week showed an increase in cardiac hormones, palace officials said.

But they said she doesn’t need to be hospitalized and is well enough to undergo scheduled cataract operations after she returns from Kyoto.

Michiko is the first commoner to become empress in modern Japanese history. Catholic-educated Michiko Shoda and Akihito married on April 10, 1959, after what is known as their tennis court romance.

They broke with traditions and brought many changes to the monarchy. They chose to raise their three children themselves, spoke far more often to the public, and made amends for war victims in and outside the country. Their close interactions have won them deep affection among Japanese. /ee