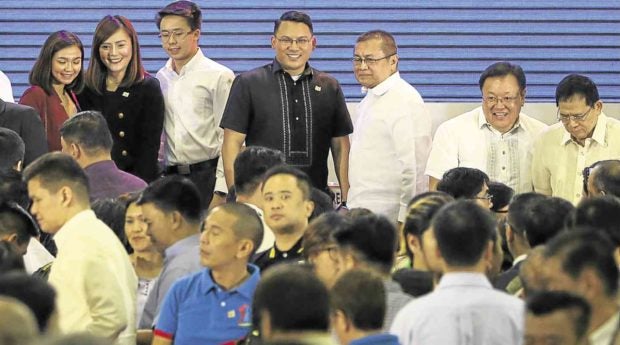 Former National Youth Commission chair Ronald Cardema (in dark shirt, center) attends the May 22 proclamation of winners in the party list elections even though the Comelec has yet to rule on his May 12 application to be the substitute nominee of Duterte Youth, an organization staunchly supporting the Duterte administration. INQUIRER file photo / EDWIN BACASMAS

MANILA, Philippines — The legal counsel of former National Youth Commission (NYC) chairman Ronald Cardema argued that the latter represented the young professionals, and not the youth sector, when he applied for substitution to become the first nominee of the Duterte Youth party-list.

“Even if they will argue, perhaps the respondent cannot be classified as youth sector he can be classified as the [young] professional sector,” lawyer George Garcia said during the Commision on Elections (Comelec) en banc hearing on Cardema’s substitution bid.

Garcia was referring to the petitioners’ argument questioning Cardema’s eligibility to represent the youth sector.

Petitioners said under the Party-List System Act law,  the first nominee for representing the youth group should not be more than 30 years old on election day. The former NYC chairman is currently 34 years old.

Lawyer Emilio Marañon, special counsel of the petitioners, said Cardema’s public statements showed that he has been representing the youth sector.

Three petitioners including representatives from College Editors’ Guild of the Philippines National Union of Students of the Philippines and Youth Act Against Tyranny questioned the substitution bid of Cardema. (Editor: Jonathan P. Vicente)