Sendong capsizes cargo ship off Dumaguete; all aboard rescued 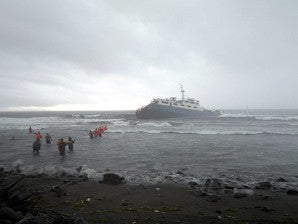 LIFELINE. Rescuers hold on to a rope as they form a human chain to rescue 32 passengers and crew of the ill-fated M/V Ever Transport III, which sank after running aground off Sitio (sub-village) Canday-ong, Barangay (village) Calindagan, Dumaguete City at 4 a.m. Saturday, Dec. 17, 2011. Big waves spawned by Tropical Storm Sendong battered the ship. Melissa Alexandra B. Pal/INQUIRER

DUMAGUETE CITY, Philippines – A cargo vessel anchored of off Dumaguete ran aground and capsized after it was battered by big waves spawned by Tropical Storm Sendong about 4 a.m. Saturday., the Philippine Coast Guard said.

Three women, a two-year-old boy and 28 crew members were rescued by the Philippine Coast Guard and other groups that responded to the distress signal sent by MV Ever Transport III.

The women were wives of crew members who had boarded the vessel to spend time with their husbands, the Coast Guard said. One of them brought their son.

Lieutenant Commander Agapito Bibat, commander of the Dumaguete Coast Guard station, said the vessel dropped anchor off the Dumaguete port Friday night and was battered by big waves around midnight.

One of the rescued crewmembers, who was not immediately identified, said they had asked permission to dock at the Dumaguete port but were denied, so they remained anchored off the coast.

Waves battered the boat and swept it to the shore in Barangay (village) Calindagan, about one kilometer away, where it ran aground and capsized around 4 a.m.

The rescued passengers and crewmembers of the ill-fated cargo vessel were taken to the Calindagan Barangay Hall and were being attended to by barangay and city officials.