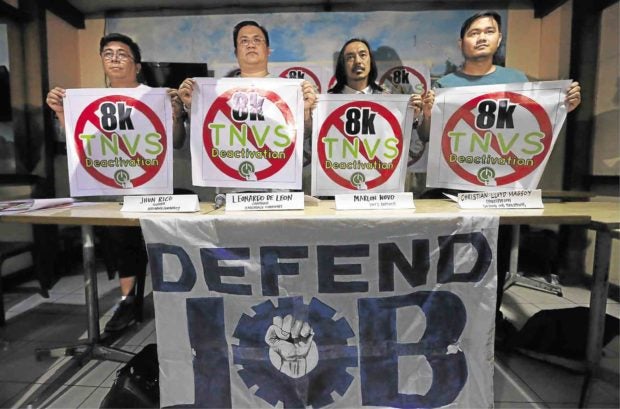 PROTEST CARAVAN Grab drivers say they will march today from Quezon Memorial Circle to the Land Transportation Franchising and Regulatory Board office to protest the deactivation of 8,000 colleagues who failed to renew their franchise. —NIÑO JESUS ORBETA

MANILA, Philippines — Grab began deactivating on Monday 8,000 of its drivers who missed the deadline to apply for the renewal of their franchise, even as affected operators agonized over its effect on both their livelihoods and the riding public.

Leonardo de Leon Jr., chair of the drivers’ group Hatchback Community, denounced both Grab and the Land Transportation Franchising and Regulatory Board (LTFRB) for engaging in a blame game at their expense.

“Grab told us its hands are tied by LTFRB,” De Leon said. But the LTFRB has questioned the existence of the “colorum” drivers despite its order to remove them as early as May.

“We don’t know which of them we should approach about this problem,” De Leon said.

The mass deactivation coincided with the LTFRB’s opening of 10,000 new slots for transport network vehicle services (TNVS) and Grab said it would help affected drivers who wanted to apply. The 8,000 colorum drivers account for about 18 percent of its active operators.

Grab Philippines president Brian Cu said the company had set up a help desk for franchise application and job fair for other Grab platforms at 11 Malakas St., Quezon City, until June 14.

In the meantime, however, Grab drivers wrestled with the cost of the deactivation on their families.

“I’ve gotten used to this being my source of income every day,” said Marlon Novo, who earned about P2,000 daily for the past three years. “As long as I drove, I would have something to take home to my family. The impact of this is going to hit me hard.”

De Leon said the timing of the purge was unfortunate as a lot of Grab drivers have kids to send to school.

TNVS drivers need to secure a provisional authority or a certificate of public convenience to operate legally, but many have decried the document-heavy application process as laborious and unfair.

Hatchback Community, which counts among its ranks about 1,000 drivers facing deactivation, said the LTFRB has refused to process the applications of its members since February 2018, citing safety concerns over the vehicle size.

“But before these cars are even sold, there is quality control,” said Novo, who owns a hatchback. “I use this car to drive my family. If it wasn’t safe, I wouldn’t use it.”

Christian Lloyd Magsoy, Defend Job Philippines spokesperson, urged Grab and LTFRB to pay attention to the drivers’ concerns as “their livelihoods are at stake here.”