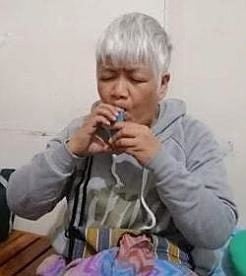 Davao City-based journalist Margarita Valle takes a puff an inhaler to stave off an asthma attack while at the Bishop’s House in Pagadian City past 10 p.m. on Sunday, June 9, 2019. (Photo by LEAH AGONOY / Inquirer Mindanao)

MANILA, Philippines — The Commission on Human Rights (CHR) on Monday said it is set to probe the “mistaken arrest” of a veteran community journalist in Mindanao.

Veteran journalist Margarita Valle was arrested at the Laguindingan Airport in Misamis Oriental on Sunday after being mistaken for Tina Maglaya, also known as Fidelina Margarita Valle, who is facing a 2006 arrest warrant for arson, and a 2011 warrant for multiple murder with quadruple frustrated murder and damage to government property.

“The CHR Regions X and IX have dispatched a quick response team to investigate and closely monitor this case towards its just resolution,” CHR spokesperson Atty. Jacqueline Ann de Guia said in a statement.

De Guia slammed the erroneous arrest, saying it should have been done with “utmost due diligence”.

“Carrying out arrests must be done with utmost due diligence. The slightest mistake impacts the fundamental rights of the arrested person,” De Guia pointed out.

“The Constitution clearly outlines the standards on how it should be carried out, which law enforcement authorities must always abide in the exercise of their duty. In particular, the right to call or have access to a lawyer is guaranteed in the bill of rights,” she added. 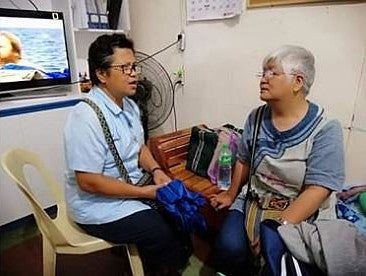 Sr. Tess Cordova of the Sisters of Good Shepherd talks to her at the Bishop’s House where she would be spending the night before returning to Davao City. (Photo by LEAH AGONOY / Inquirer Mindanao)

De Guia said arrests must be conducted under “highest standards”, and noted that the incident raises doubts on the manner by which members of the Philippine National Police (PNP) serve arrest warrants.

“The mistaken arrest of Margarita Valle puts into question the PNP’s manner and guidelines of serving arrest warrants. When fundamental rights are at stake, only the highest standards must be observed for the consequences could be irreversible,” she said.

“Considering the current climate of impunity and growing reports of harassment and red tagging, cases of mistaken identity raise doubts and fears,” the CHR official added.

Following the arrest, PNP chief Gen. Oscar Albayalde on Monday admitted that the institution is still lacking technological capability in verifying intelligence information but said that the mistaken arrest was only a “very rare” incident.

Albayalde said that its ground officers carried out the arrest based on information from a tipster.

The information, Albayalde said, was referred by their counterparts in the Armed Forces of the Philippines.