A police officer in New Jersey has recently inspired his community after he gave a homeless man wearing wet socks a new pair.

The officer’s random act of kindness caught the attention of his department when Nick Renn, a funeral director at the nearby Danks-Hinski Funeral Home, captured the moment on camera and told the Lindelwold police department about the good deed he witnessed, as reported by the Courier Post Online, last Thursday, June 6. 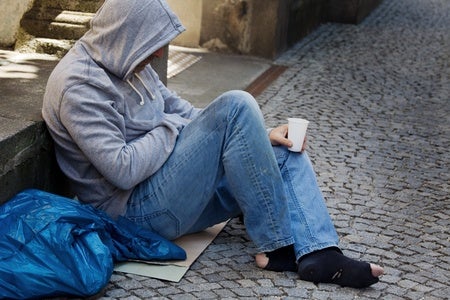 Chief Thomas Brennan was not surprised when he discovered that it was patrolman Ron Burrows who was behind the good deed. “He is that kind of person,” Brennan said in the report.

Burrows revealed that it was not the first time he gave the man new socks. “He couldn’t wait to get them on. I probably gave him the last ones he was wearing,” Burrows said in the report. “When he took his socks off, his feet were just raw. I felt horrible for him.”

The patrolman stated that many homeless people are facing different issues. From his end, he does what he can for them such as handing out new pairs of socks to those who need it.

“You give them a pair of socks and it makes their day a little better,” Burrows was quoted saying. “You don’t know where it could go. Maybe they walk a little further to go get an ID or get themselves to a shelter.” Ryan Arcadio/JB

Homeless man returns to university 4 decades after dropping out, thanks to student’s help

Read Next
Bishop Pabillo: Is the Comelec compromised?
EDITORS' PICK
In Borongan, nuns play hoops (not mahjong)
PH resumes talks with China on Chinese-funded transport projects
Powered by style, innovation and passion
Why Tagle is a leading papal contender
House energy committee chair Arroyo bats for cheap electricity
A laptop that maximizes your WiFi so you can maximize your productivity
MOST READ
Imee Marcos bares illegal importation of white onions
Why Tagle is a leading papal contender
SRA officials should resign after ‘illegal sugar order’ – Zubiri
My neighbor FVR: From soldier to president
Don't miss out on the latest news and information.