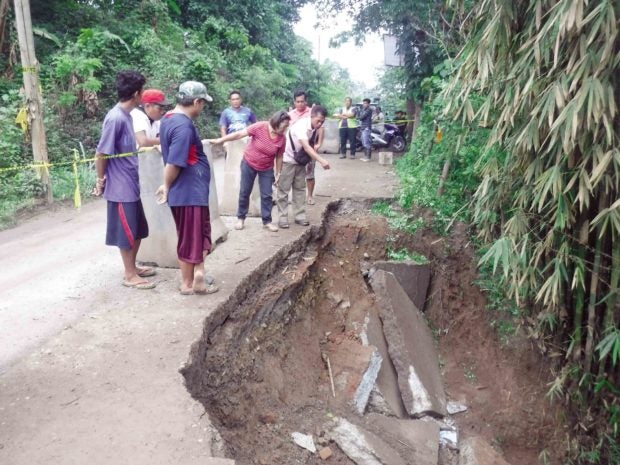 DAMAGED PATH A portion of Igay Road in the City of San Jose del Monte has been damaged by eroding soil, preventing trucks from collecting garbage from 22 Bulacan towns. —Contributed photo

Noel Lim, chief operating officer of Wacuman sanitary landfill in Norzagaray town, said their facility had stopped accommodating trash from Bulacan province due to rocks and debris that blocked Igay Road leading to the dump.

The Wacuman landfill is situated at the mountainous Sitio Tiakad in Barangay San Mateo in Norzagaray.

Mayor Ambrosio Cruz of Guiguinto said they started sending their garbage to a landfill in Clark, Pampanga, on Saturday after getting an approval from the municipal board.

Cruz, president of the League of Municipalities of Bulacan, said other affected towns may also start sending their garbage to Clark. He did not say how many tons of garbage needed to be rerouted to Pampanga.

Municipal officer Reynaldo Cardona said Igay Road was already scheduled for reblocking and widening. Only a farm-to-market road, Igay is designed for light vehicles and not for heavy dump trucks.

Because of the uncollected garbage, many residents have turned to social media to air their grievances. —Carmela Reyes-Estrope