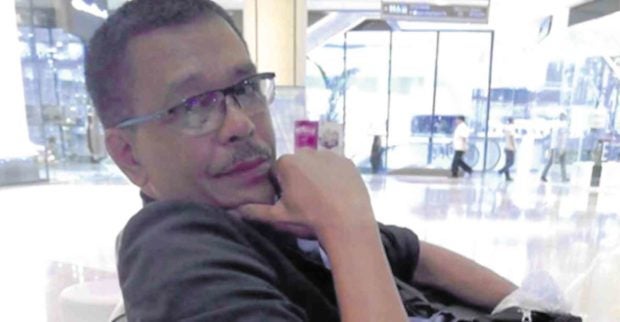 THIRD NPC MEMBER KILLED SINCE 2014 Adam Moraleta’s killing was “a shock and a surprise for its seeming lack of compelling reason.” —PHOTO FROM ADAM MORALETA’S FB ACCOUNT

MANILA, Philippines — The National Press Club (NPC) of the Philippines called on the Presidential Task Force on Media Security on Sunday to take swift action in resolving the murder of one of its active members, People’s Television Network account executive Adam Moraleta, in Quezon City last week.

In a statement, the NPC said Moraleta was its third member to be slain within five years, following the killing of Rubylita Garcia and Joaquin Briones in 2014 and 2017, respectively.

The two provincial journalists, it added, had “earned the ire of local personalities” due to their reporting.

Moraleta, on the other hand, was focused on “good news.”

“Thus, his killing comes both as a shock and a surprise for its seeming lack of compelling reason,” the NPC said.

The 56-year-old Moraleta was shot by two unidentified men on a motorcycle at 7:25 a.m. on June 6, shortly after he went out of his house on Marcelino Street in Barangay Holy Spirit to buy something from a store.

Since there were no identification cards on him, the police initially listed him as an “unidentified male person between 40 and 45 years old.”

Moraleta’s son, Jared Keenan, identified him two days later. His family had been looking for him since June 6, when they reported him missing.

Maj. General Guillermo Eleazar, National Capital Region Police Office chief, told the Inquirer that probers were exploring two possible motives in the mediaman’s slay — a land dispute in Culion, Palawan province, and a case he had filed against his former employer, Remate Express.

Eleazar said Moraleta, a Palawan native, had been helping another individual settle a land dispute in the province.

But Moraleta’s son, in a statement to the police on Sunday, said his father and other former Remate employees had filed a case in court against the company and were set to receive money as part of a settlement next week.

He added that his father’s former Remate colleague claimed her car was tailed by an unidentified suspect on a pink motorcycle the night before Moraleta was killed.