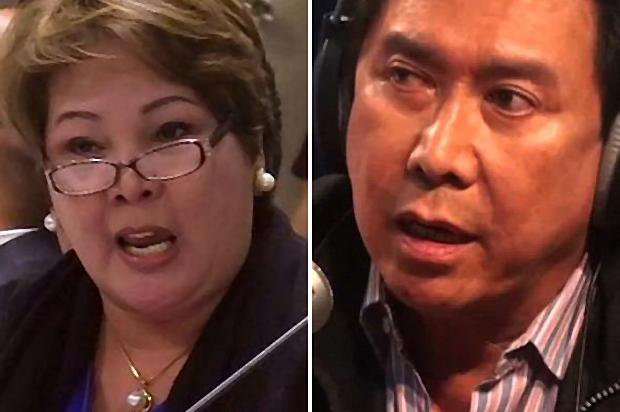 In May, Tulfo published two articles on The Manila Times titled “That woman Sandra Cam” and “The Law of Karma and Trillanes.”

Cam called the contents of these articles as “libelous.”

In “That woman Sandra Cam,” Tulfo called the board member “the No. 1 intriguer in the PCSO”, adding that it was Cam “who fed a Palace official the lie that Balutan had accepted bribe money.”

Tulfo was referring to retired Marine Brig. Gen. Alexander Balutan who was previously fired by President Rodrigo Duterte as general manager of PCSO.

Meanwhile, in “The Law of Karma and Trillanes,” Tulfo cited an alleged event in 2001 when “police reported that unrefined shabu was being shipped through a resort in Catanduanes that belonged to Cam.”

“Ramon Tulfo’s published libelous article containing accusations that I am a corrupt government official and a drug trafficker are false and are but malicious imputations of crimes tending to cause dishonor and to discredit me in my personal and official capacity,” Cam said in the complaint filed June 7.

“His unjustified and unfounded accusations are utterly devoid of good faith and have no redeeming value other than to vilify, malign, and destroy my reputation and good name,” she added.

Cam also hit Tulfo’s “self-promoted reputation as a hard-hitting and no-nonsense journalist in blatant violation of the ethical standards of journalism.”

“The pernicious accusations leveled against me are but characteristic of Respondent who, as a journalist, has the penchant of shooting from the hip without first verifying the truth behind his false and unfair accusations if only to bolster his self-promoted reputation as a hard-hitting and no-nonsense journalist in blatant violation of the ethical standards of journalism,” Cam said.

“Clearly, Respondent Ramon Tulfo has committed the crime of Libel under Article 353 in relation to Art. 355 of the Revised Penal Code when he caused the publication of statements in a newspaper article and in the internet which was published in Manila Times on May 21 and 28 of the current year maliciously and feloniously imputing crimes (corruption and drug trafficking) against me,” Cam added.

Cam earlier asked to be relieved of her duties as PCSO board member amid alleged corrupt activities in the agency.

“I’m appealing to the President. I love our country. You know that. And I love you for being firm of your advocacy of anti-corruption,” Cam said in a press conference.

READ: Sandra Cam wants out of PCSO board

Following Cam’s call, the Palace said she could resign and file a formal complaint regarding the alleged activities.

“She could file corruption charges against the PCSO officials and submit proof of her allegations before the said commission,” presidential spokesperson Salvador Panelo said.