DES MOINES, Iowa – Democratic White House hopefuls on Saturday attacked President Donald Trump as harmful to LGBTQ Americans and promised if elected they would not just restore gay rights but expand them.

Speaking to a crowd gathered in front of the Iowa State Capitol as part of the Des Moines gay pride festivities, seven candidates went after the president and offered their visions for how their administrations would handle gay rights differently.

“We now have a president who is a racist, who is a sexist, who is a xenophobe, who is a religious bigot and who is a homophobe,” Vermont Sen. Bernie Sanders said to cheers from the crowd. 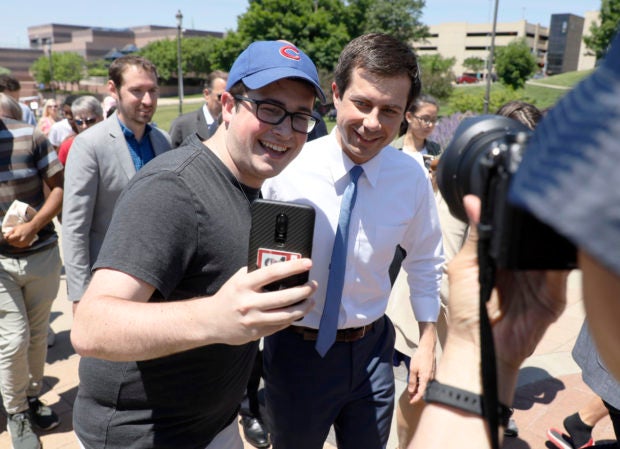 Sanders promised to unify Americans behind a push to “end all forms of discrimination.”

Former Texas Rep. Beto O’Rourke said Trump’s discriminatory actions and rhetoric “doesn’t just offend our sensibilities — it fundamentally changes who we are as a country.”

Former Maryland Rep. John Delaney slammed Trump as a president “that is discriminatory in every sense of the word,” and New York Sen. Kirsten Gillibrand denounced the Trump administration’s rollback of protections for transgender students as “immoral.”

Both O’Rourke and Gillibrand pledged to sign the Equality Act into law, which would provide federal protections against discrimination of LGBTQ individuals.

But Gillibrand went further than the other candidates speaking at the forum, outlining the comprehensive LGBTQ rights policy she’s released.

Her policy would allow individuals to choose a third gender identity on their driver’s license, allow transgender students to use the bathroom that corresponds with their gender identity and fund mental health treatment for LGBTQ youth, among other things.

She’s the only candidate thus far to release a proposal focused on the community.

“The administration under my presidency will be the most gay rights-friendly in the history of the world,” Gillibrand said.

Pete Buttigieg, the mayor of South Bend, Indiana, who’s seeking to become the first openly gay presidential nominee from a major political party, criticized the Trump administration for its anti-LGBTQ policies, but gave a pass to those who work for the administration.

“They are not proud of what they’re doing,” he said of those tasked with implementing the administration’s policies.

In addition to speaking at Saturday’s forum, a handful of presidential candidates fanned out across Des Moines on Friday night and Saturday morning, greeting voters at the gay pride celebration.

Gillibrand bartended at a local gay bar Friday night, and O’Rourke ran in a 5k Saturday morning, while Sanders and others walked the streets of the gay pride fair.

The focus on gay rights in Iowa took on historical significance, as this year is the 10th anniversary of the Iowa Supreme Court ruling in favor of same-sex marriage in the state, and a number of the candidates paid homage to that history in their remarks.

Trisha and Kate Varnum, the leadoff plaintiffs in that case, appeared on the sidelines of the event and greeted some of the candidates who spoke.

According to Daniel Hoffman-Zinnel, executive director of OneIowa, a Des Moines-based LGBTQ-rights organization, the state’s LGBTQ community has grown in numbers and organization in recent years, particularly since Trump was elected.

“We’re a very engaged community because we are so personally impacted by so many things our legislators and politicians are making decisions upon,” he said, noting the Republican-controlled state legislature recently passed a law effectively barring the use of Medicare and Medicaid for gender reassignment surgery.

Hoffman-Zinnel said this year there are 16 pride events across the state, more than ever before, and the candidates ignore the LGBTQ community at their own peril.

While Buttigieg has a pitch to make as the first openly gay candidate in a same-sex marriage, Hoffman-Zinnel said he doesn’t have a claim on the community as a whole — and that candidates overall should be speaking out more about gay rights.

“You have this huge platform to talk about issues that we care about and you have an opportunity to potentially educate people that are unaware or uninformed, so I think we would love to see more of the candidates use their space of privilege and power to engage in these conversations,” he said. /gg