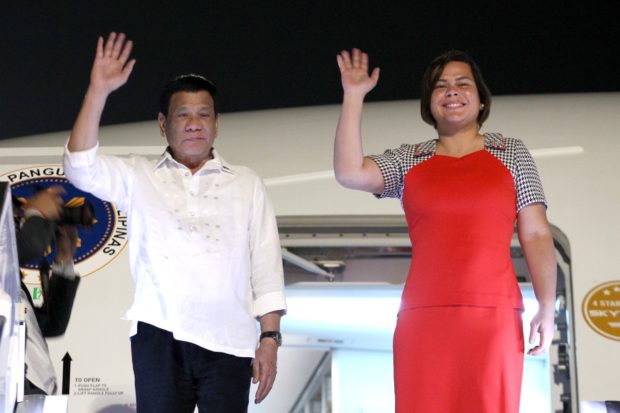 MANILA, Philippines — President Rodrigo Duterte appealed to his daughter, Davao City Mayor Sara Duterte-Carpio, to not run for national office as long as there were politicians in the opposition like Sen. Antonio Trillanes IV or those belonging to the Magdalo party-list.

“I am stating publicly now that I am discouraging my daughter to run for any national office. Maawa kasi ako. It’s an office — entitlement of ano, honor, lahat,” Duterte said in an interview with Pastor Apollo Quiboloy’s program, “Give Us This Day,” on Saturday.

“As long as we have politicians like Trillanes, itong mga Magdalo. Akala mo kung sila lang rin ang marunong. They think they are the only patriots of this country. ‘Yung mga Otso Diretso,” he added.

This was not the first time that the President discouraged his daughter from running for the presidency in 2022. He told his daughter that being the chief executive would only get her nothing but sacrifices and insults.

“As long as we have these politicians ‘yung mga Otso Diretso, avoid ninyo ‘yung presidency,” he said.

The President also said the prominence of his surname could fade in politics after three years.

“So maski gaano kami kasikat na pamilya, there will always be a time to fade. I may be the more brighter than the lights here shining as president, but I will grow dim three years from now,” he said.