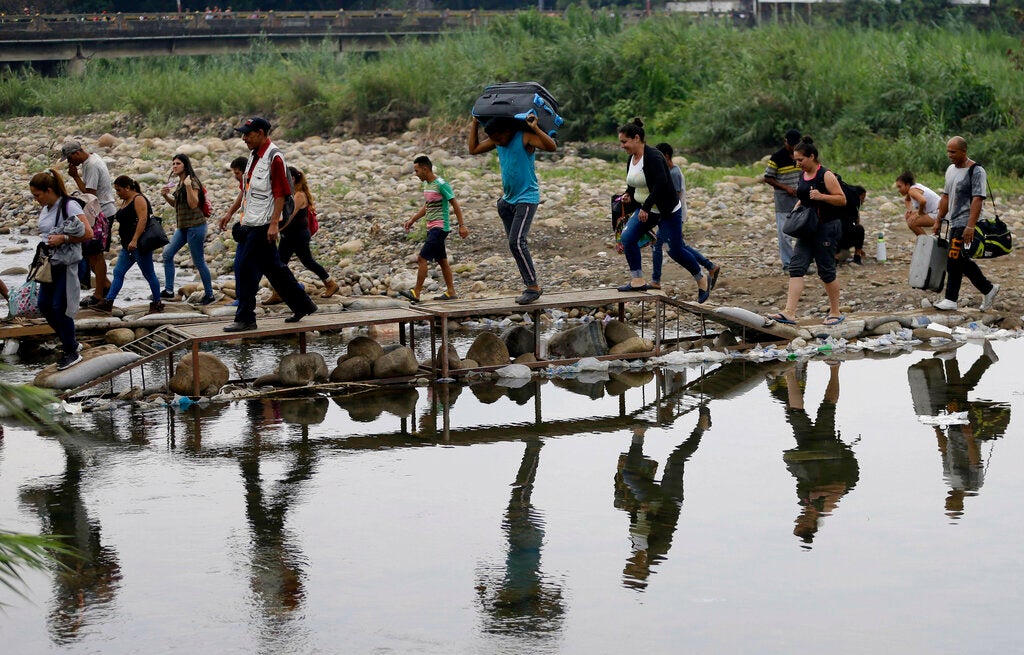 In this April 14, 2019 file photo, Venezuelans cross illegally into Colombia near the Simon Bolivar International Bridge, close to Cucuta, Colombia. The U.N. refugee agency said Friday, June 7, that the number of Venezuelans who have left their country in recent years has surpassed 4 million. (AP)

CARACAS, Venezuela — The number of Venezuelans who have left their country in recent years has surpassed 4 million, the United Nations said Friday ahead of a visit to the region by UNHCR envoy Angelina Jolie.

The U.N. refugee agency said the number of Venezuelan refugees and migrants rose by 1 million after November, indicating a rapid escalation as economic conditions deteriorated and a conflict between the government of President Nicolás Maduro and the opposition intensified.

“These alarming figures highlight the urgent need to support host communities in the receiving countries,” said Eduardo Stein, the U.N.’s Joint Special Representative for Venezuelan refugees and migrants, in a statement. “Latin American and Caribbean countries are doing their part to respond to this unprecedented crisis but they cannot be expected to continue doing it without international help.”

The exodus comes amid a grinding political standoff between Maduro and opposition leader Juan Guaidó.

Guaidó, who heads the opposition-controlled congress, revived a flagging movement in January by declaring himself interim president, quickly drawing recognition as Venezuela’s rightful leader from the U.S. and more than 50 nations.

But Maduro, with the support of the military and allies Cuba and Russia, has defiantly held on to power in the face of U.S. oil sanctions that are adding to misery in a nation hit hard by hyperinflation and widespread fuel, food and power shortages.

A record number of Venezuelans have fled the country’s crisis, with Latin American countries hosting most of them.

More than 1.3 million Venezuelans are in Colombia, followed by 768,000 in Peru and large numbers of migrants in Chile, Ecuardor, Brazil and Argentina, UNHCR said. Mexico and countries in Central America and the Caribbean are also hosting significant numbers of refugees and migrants.

On Friday, Jolie planned to start a two-day trip to the Colombian border with Venezuela to assess the migrant crisis caused by the country’s tumult. She is scheduled to visit a border camp where Venezuelan migrants are staying in tents and hold a news conference in the Colombian region of La Guajira on Saturday.

Jolie last visited the region in October, when she met Venezuelan refugees in Peru.

UNHCR says the goal of operations at its camp in Maicao is to provide shelter and food to the most vulnerable migrants and refugees, while partner organizations help legalize their status, find housing, or relocate them to other areas of Colombia. When a camp resident leaves, the space is given to someone else who has recently arrived from Venezuela.

One initiative known as the Quito Process has brought together countries affected by the migrant crisis to formulate a coordinated response, while another plan was launched last December with the aim of helping 2.2 million Venezuelans and 580,000 people in 16 countries.