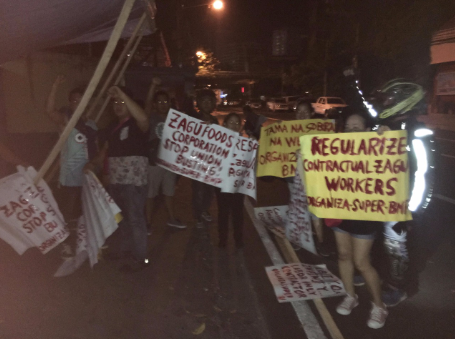 “The Union filed a Notice of Strike last January to address these issues, but discussions collapsed earlier this week,” the Organization of Zagu Workers – Solidarity Unions in the Philippines for Empowerment and Reforms (Organiza-Super) said in a statement.

Union Secretary Hazel Calain said that even as her group was holding dialogues with the National Conciliation and Mediation Board (NCMB), the management was “harassing union officials and members by sending several Notices to Explain for joining union activities.”

Calain noted that around 250 employees performing core functions for the company such as machine operators and service crew are “contracted out from three different service cooperatives and manpower agencies.”

“This is a clear violation of D.O. 174 which states that companies cannot contract out jobs that are directly related to their business,” Calain said. “Furthermore, all the supervisors and the equipment that these contractual workers use belong to Zagu not the contractors. These are already prohibited by the same law.”

Calain was referring to Department Order 174, which implemented stricter guidelines on contractualization.

The group added that the strike was held ahead of the company’s 20th anniversary. The company was founded in 1999 by Genevive Lim-Santos.

“Not only has our contribution not been recognized, but we also continue to suffer harassment and illegal contracualization,” Organiza-Super president Shirley Fulgencio said.