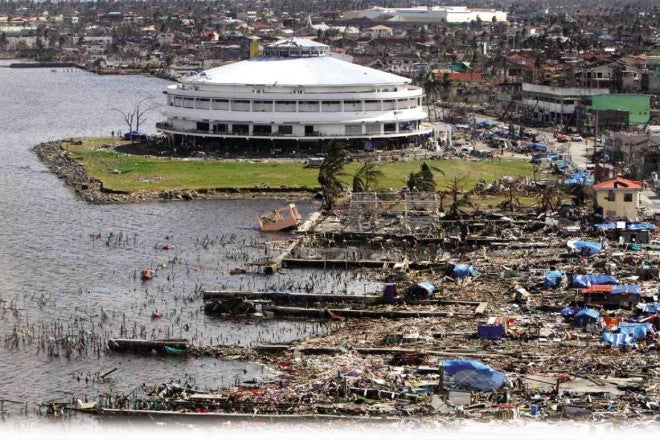 AN AERIAL view of part of Tacloban City, taken three days after Supertyphoon “Yolanda” (international name: Haiyan) struck, shows a scale of devastation comparable with that caused by the explosion of the world’s first atomic bomb in Hiroshima with entire communities flattened. INQUIRER FILE PHOTO

MANILA, Philippines — The Commission on Human Rights (CHR) on Friday said it hopes the Philippines will remain active in climate change prevention even as the government decided to stop sending delegates to climate change conferences.

“The Department of Foreign Affairs has decided to stop sending official representatives to climate conferences but clarified that we will continue to vote through online communication,” CHR Spokesperson Jacqueline de Guia said in a statement on Friday.

“We hope that despite non-attendance, we will remain active in climate change prevention,” she added.

Her statement comes after Foreign Affairs Secretary Teodoro Locsin Jr. said Wednesday that the Philippines will no longer send delegates to climate change conferences that would require air travel.

“Following (President) Duterte’s answer to UN’s plea for yet another stronger stand against climate change – which he branded as more hot air – I am rejecting all official participation in climate change conferences requiring air travel,” Locsin announced on Twitter on Wednesday.

De Guia asserted that the Philippines’ participation in climate change talks “ensures that we have a say on the climate discourse, which impacts us greatly.”

“Approximately 20 typhoons visit our country yearly. In 2013, we were ravaged by ‘Yolanda,’ the strongest typhoon in recorded history,” she pointed out.

“Our participation in global discourse is not in vain,” she added.

In 2015, the Philippines led the advocacy for global warming threshold of 1.5 degrees Celsius during the 21st Conference of Parties to the United Nations Framework Convention on Climate Change at Le Bourget in Paris, France.

“This ambitious goal is now enshrined in the Paris Agreement, which is meant to strengthen and guide efforts for global climate action,” De Guia said.

“Participating in the global discourse can also be an avenue to press for greater responsibility and accountability especially from the primary contributors of global emissions,” she also said.

“It is also equally important that the State continue to keep its commitment in preventing climate change and to actively implement policies to mitigate its impact,” she said.

“The future of humanity is at stake and our country is among those that bear the brunt of this global phenomenon. We, therefore, encourage the government to take advantage of all avenues that aim to address the climate problem,” she added.

To recall, CHR had conducted a national inquiry to investigate the alleged responsibility of major fossil-fuel companies to climate change and how climate change impacts on the rights of Filipinos. (Editor: Katherine G. Adraneda)