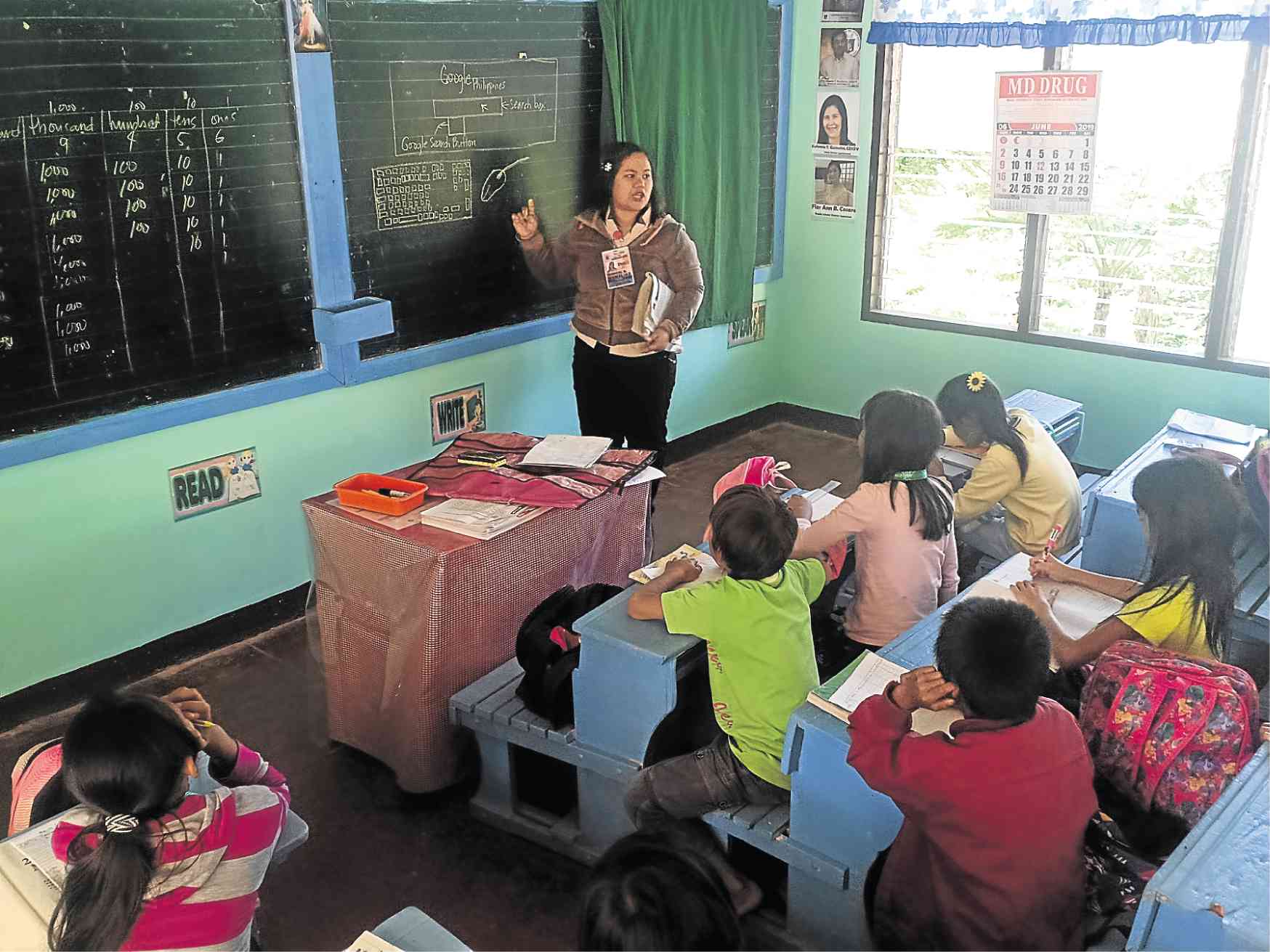 VISUAL AID Pupils at Balutakay Elementary School in Bansalan, Davao del Sur province, have no access to modern learning equipment so their teacher, Maricel Mamalias, relies on chalkboard illustrations to show them how computers and the internet work. —ORLANDO B. DINOY

BANSALAN, DAVAO DEL SUR — While many kindergarten pupils in the cities already have access to internet on their tablets and cellular phones, students of Balutakay Elementary School in Barangay Managa here are still trying to figure out the digital world not through a computer but through a blackboard featuring their teachers’ drawings.

Situated on the slopes of Mt. Apo, the school is around 15 kilometers from the village center and 25 km from this town’s business district.

Maria Editha Pedregosa, the school principal, said the area had no cell site and no internet connection, a disadvantage both to teachers and pupils.

Pedregosa said she oftentimes missed emergency meetings called by the Department of Education (DepEd) because she could not easily be reached through her mobile phone. But schoolteachers are not making this lack of connectivity and equipment a hindrance to teaching.

Maricel Mamalias, a Grade 6 teacher, said she had to make illustrations on the board to give the children an idea what a computer looked like.

“We are serious about improving the life chances of the most disadvantaged. So, if we will not tackle digital technology, the poorest children will be left even further behind,” Pedregosa said.

Among the school’s Grade 6 pupils, Riza Pardillo, 12, dreamed of working for a call center someday but she said she had never tried using a computer before.

Pardillo said she saw computer games in some internet cafés in town but she learned from her teacher that computers could also send and receive e-mails and could also be used for research. She has never tried it, though.

Through her teacher’s drawings, Pardillo learned about the use of the CPU (central processing unit), the keyboard and the mouse, though she had never touched one, she said.

Her family lives on a hilly portion of Sitio Pluto, where they earn a meager income growing vegetables.  From their home, Pardillo has to walk 4 to 5 km of rolling hills daily to get to school because she cannot afford the P20 “habal-habal” ride to school, she said.

“I have to endure the long hike to school because my mother wants me to finish college and help the family,” she said.

Pedregosa said the school, which welcomed 255 students this year, also faced the perennial problem of textbook shortage. In Grade 6 alone, where there are seven subjects, pupils only get textbooks on Mathematics.

Of the school’s 315 pupils last year, 60 had yet to reenroll this school year.

But if these pupils still fail to show up in July, teachers will have to go to their houses and ask their families to send them back to school, Pedregosa said. She attributed the high dropout and absence rates among students here to the fact that they were also made to help their parents in the farm.

Mamalias said she hoped that their problems would be given priority by the DepEd, especially now that the government had implemented senior high school, a main component of the K-12 (Kindergarten to Grade 12) basic education program. She said the program aimed to provide Filipino students sufficient time to master concepts and skills so they could be globally competitive.

Like most of her classmates who help their parents till their farms, Pardillo is skillful in handling tools, like the scythe that she uses in harvesting cabbages. But one day, she hopes she will also learn how to use a computer and explore a world beyond her rural community with a click of a mouse.