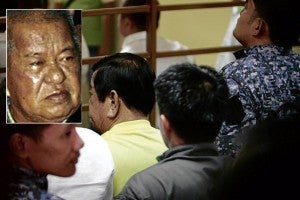 ANDAL Ampatuan Sr. (inset), alleged mastermind in the 2009 Maguindanao massacre of at least 57 political foes and journalists, has his back turned away from cameras during his arraignment at Camp Bagong Diwa in Taguig City. Relatives of victims gasped upon hearing his plea of not guilty. RAFFY LERMA

MANILA, Philippines—Although bereaved, they were happy to see him in handcuffs.

The patriarch of the powerful Ampatuan clan of central Mindanao on Wednesday pleaded not guilty to charges of masterminding the worst election-related violence in Philippine history, drawing jeers from the victims’ kin.

Andal Ampatuan Sr.’s arraignment took place at the maximum security prison compound of the Bureau of Jail Management and Penology in Camp Bagong Diwa, Taguig City, more than 18 months after what has come to be known as the Maguindanao massacre and the single worst killing of media workers in the world.

The massacre left at least 57 persons, including at least 30 media workers, dead. The body of a 58th victim has yet to be found.

Ampatuan Sr., a former governor of Maguindanao who was known to deliver crucial votes for his ally, then President Gloria Macapagal-Arroyo, and her candidates in national elections, was arraigned together with Mohammad Datumanong, an alleged bagman of the clan.

Esmael “Toto” Mangudadatu, the incumbent governor of Maguindanao who lost his wife, sisters and other kin in the massacre, said he was torn between “joy and pain.”

“We all know he’s the mastermind,” Mangudadatu, who sat only a few meters away from the accused, said of the 70-year-old Ampatuan Sr.

“This is the first time that I personally saw him in a long while. He still likes to act. He asked for a [Maguindanaon] interpreter [to read the charges to him], but then he entered his plea in English,” the governor said. “But I’m happy. I saw him in handcuffs.”

Ampatuan Sr. and Datumanong were the 57th and 58th suspects to be arraigned in the multiple murder case. The primary accused is Andal Ampatuan Jr., who has also pleaded not guilty.

Of the 196 suspects, only 79 are in government custody. Those who remain at large include Ampatuan relatives and militiamen who worked under the clan’s direct command.

Of the 21 suspects yet to be arraigned, four are also prominent members of the Ampatuan family: Anwar, Akmad, Sajid and Zaldy, the former governor of the Autonomous Region in Muslim Mindanao (ARMM).

About 25 relatives of the victims and their sympathizers erupted in jeers when Ampatuan Sr. entered his plea.

“I will order all of you out of the courtroom,” warned the presiding judge, Jocelyn Solis Reyes. “No noise should be heard from the private complainants. Please.”

Sigfrid Fortun, Ampatuan Sr.’s lawyer, angrily asked the judge to order the victims’ kin expelled from the courtroom: “I move for exclusion. … We are in a court of law, not in a marketplace.”

Fortun assailed lead prosecutor Peter Medalle and private prosecutor Nena Santos for failing to stop the jeers which, he said, had been orchestrated.

He asked the judge to have Santos thrown out for “encouraging” the victims’ kin.

“It was planned … This is a total travesty,” Fortun said. He added that Justice Undersecretary Francisco Baraan III, who was present, should report the matter to Justice Secretary Leila de Lima.

Baraan, the prosecutors and Mangudadatu said the outburst was a spontaneous action.

“That’s a normal reaction of the victims. You cannot control their emotions,” said Mangudadatu, who was accompanied by his brothers Khadaffy (a member of the ARMM Assembly), and Sajid, Ibrahim and Freddie (the mayors of Pandag, Buluan and Mangudadatu towns, all in Maguindanao).

Backhoe in his name

Mild-mannered and calm during most of the earlier hearings, Juliet Evardo expressed disbelief when she heard Ampatuan Sr. enter his plea.

“Why [did he say] not guilty? The backhoe was in his name,” Evardo said of the excavator used to bury the victims, including her 24-year-old son Julito, an editor of UNTV, in a mass grave.

“And he’s being defended by his lawyer who asked us victims to be sent out [of the courtroom]? If this happened to them, how would they feel?”

“But I could not help letting out a gasp,” she said. “My heart skipped a beat when he was finally arraigned. For the longest time, we have waited for him to face the case.”

Editha Tiamzon, the widow of Daniel Tiamzon, the driver of a van that was carrying the journalists, said it was her first time to see Ampatuan Sr.

“He’s not as old and as sickly as they claim,” she said.

Tiamzon said she would stay put should Judge Reyes order her and the others to leave the courtroom.

“You can’t blame the victims’ relatives for their outburst. We’ve waited for [the arraignment] for so long. Their reaction was normal,” she said, adding that the outburst was not a calculated move.

Dressed in a yellow prison shirt, black pants and black leather shoes, Ampatuan Sr. was handcuffed when he was led into the courtroom.

He sat surrounded by more than a dozen uniformed jail guards, with his head bowed most of the time. Occasionally he glanced in the direction of the Mangudadatus or drank from a bottle of mineral water.

He had grown his hair from the old crew cut, but Khadaffy Mangudadatu said of the man who was once his family’s close political ally:

“I recognized him. I will never forget the way he walks. I have known him for a long time, I would remember.

“Wherever he sat, he always wanted to be the star, the center of attention. He was the star for all seasons.”

As Ampatuan Sr. was being led out of the courtroom during the lunch break, Ibrahim Mangudadatu directed some words to him in Maguindanaon.

Translating, a relative of the Mangudadatus said the mayor had sarcastically told Ampatuan Sr. “that this is what he gets for all his worshipping.”

“When [Ampatuan Sr.] visited Mecca, he was claiming he was a prophet,” the relative said.

Mockery of the court

It was not just Ampatuan Sr.’s arraignment that caused sparks during Wednesday’s hearing.

The arraignment of Datumanong also led to a heated exchange, this time between Judge Reyes and Paris Real, the lawyer of the accused.

Real had asked that the charges against Datumanong be quashed, saying his client was a victim of misidentification and was actually one Nicodemus Tolentino.

But an angry Reyes pointed out that it was Real who had asked the court “as early as” March to have his client arraigned.

“You are obviously making a mockery of the court!” she told Real.

Reyes ruled that Datumanong’s arraignment should proceed while noting Real and his fellow defense counsel’s objections.

After the charges were read to him and he was told to enter his plea, Datumanong said: “Not guilty po.”

But Real asked the court to strike his client’s plea from the records, again insisting that the latter was not the Mohammad Datumanong in the charge sheet.

“[But] it came from your client. Don’t put words in your client’s mouth,” Reyes said.

The judge set the pretrial of Ampatuan Sr. and Datumanong on June 6 and 7. She said their trial proper would commence on June 15.

In the afternoon session, defense lawyers resumed the cross-examination of PO2 Danny Fortaleza, a sketch artist of the scene-of-the-crime team that processed the massacre site in Maguindanao.

The defense pointed out inconsistencies in Fortaleza’s drawings, particularly from the draft and a computer-aided version that prosecutors had presented as evidence.

Ampatuan Sr. was arraigned on the same day the Committee to Protect Journalists (CPJ) said the Philippines ranked third, behind Iraq and Somalia, in its Impunity Index for 2011.

The index calculates unsolved journalist murders as a percentage of a country’s population.

“The government’s case against dozens of defendants in the 2009 massacre in Maguindanao province … reflects an overall pattern in which Philippine authorities often identify suspects but rarely win convictions,” the group said, adding that there were 56 unsolved murders of journalists in the Philippines.

But the International Federation of Journalists said on Wednesday’s arraignment was “an important milestone.”

“We can only hope that the trial continues to progress from this point on for the sake of the victims’ families,” said the federation’s Asia-Pacific director, Jacqueline Park.

The massacre victims were traveling in a convoy in Maguindanao to witness the filing of Mangudadatu’s papers of candidacy to stand against Ampatuan Jr. in the May 2010 elections when they were stopped by armed men on a mountain road.

They were taken down a dirt road and shot and buried in mass graves. With reports from Miko Morelos, AP, Reuters and AFP