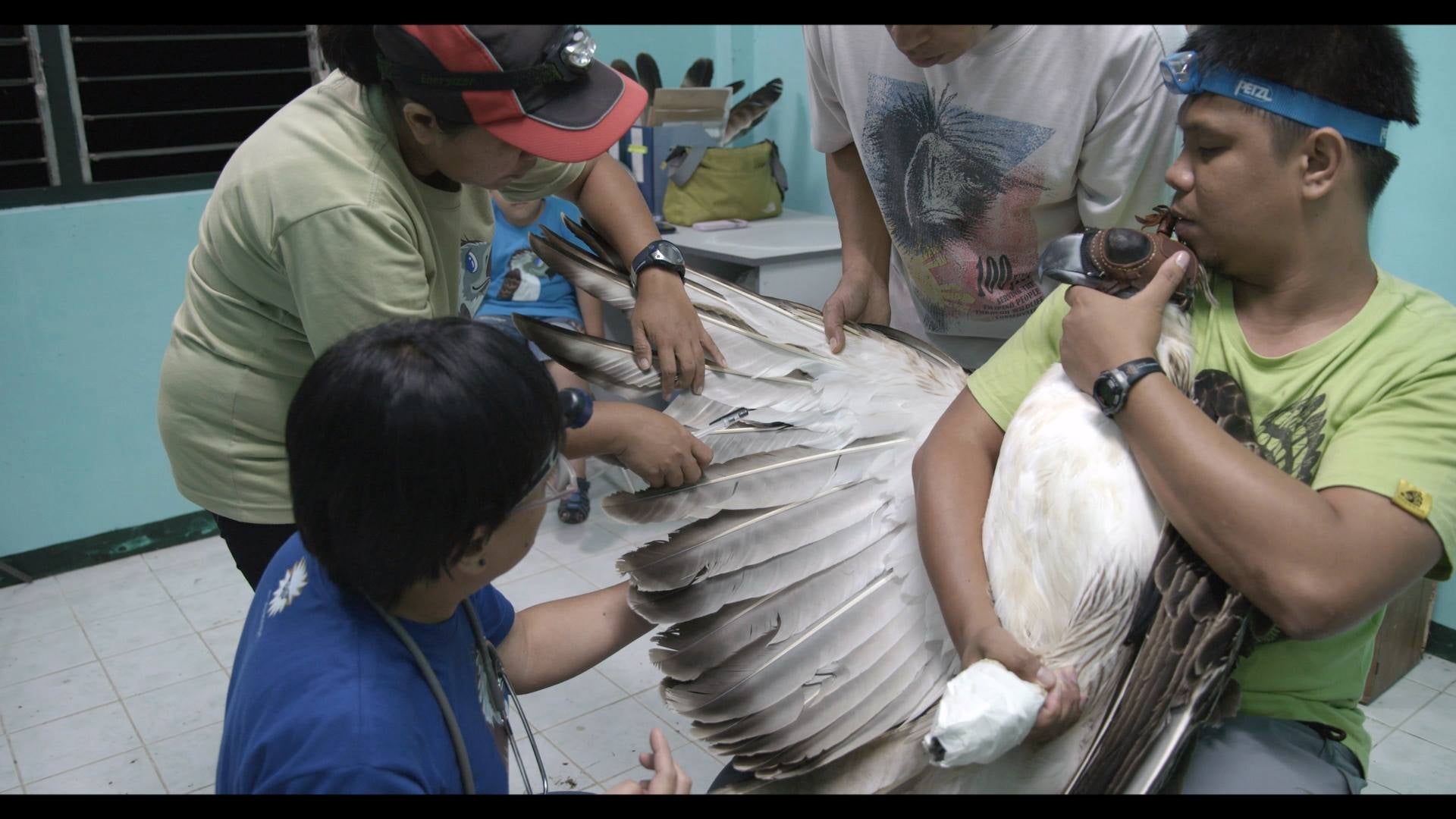 DOCUMENTARY SCENE Philippine Eagle Center workers tend to the injured Matatag, a Philippine eagle rescued fromMt. Apo in 2011. The bird’s recovery and release in 2014 is one of the highlights of the award-winning documentary “Bird of Prey.” —BIRD OF PREY FACEBOOK PAGE

MANILA, Philippines — Somewhere deep in the forest of Mt. Sinaka in North Cotabato province, a pair of Philippine eagles take to the sky to look for prey to feed their new offspring.

In its nest, the hatchling looks so vulnerable.

But not only its parents were watching in those early days of the bird. Less than a hundred meters away, perched high on a tree rig with his camera, was 64-year-old Neil Rettig.

In 2013, the renowned wildlife cinematographer returned to the jungles of Mindanao, nearly four decades after he had captured the first few images of the Philippine eagle (Pithecophaga jefferyi).

This time, his mission was to document the birds of prey he thought would cease to exist.

Rettig’s journey — and the amazing passion of those working to protect the critically endangered species — is the focus of the award-winning documentary “Bird of Prey,” now showing in cinemas in Mindanao in time for Philippine Eagle Week.

The 90-minute film looks closely at the rarest eagle on the planet, capturing the painstaking efforts to save the bird and its habitat.

“The Philippine eagle may be found only in the Philippines,” biologist Perry Ong (now deceased) says in the documentary. “But it is the property of the world.”

In 1977, the young Rettig and his team landed in the Philippines and produced the first film images of the Philippine eagle in the wild.

Their images had catapulted the rare bird — once feared and least understood — into the national consciousness.

The visually stunning documentary, which has gone the  rounds of international screenings, offers a journey into the life of the fierce raptor.

In vivid color, in both archival and new footage, the film shows the role of man in the bird’s survival and demise.

To make people understand the present and the future of the species, journalists and advocates speak in the film about the massive habitat loss the bird suffered in the 1970s under the dictatorship of Ferdinand Marcos, when hectares upon hectares of trees were felled in the pursuit of economic growth.

The film is directed by Eric Liner and produced by the Philippine Eagle Foundation (PEF), Cornell Lab of Ornithology and Neil Rettig Productions.

In celebration of the mighty raptor, the documentary is on screens in the cities of Cagayan de Oro, Butuan, Davao, General Santos and Zamboanga until June 12.

PEF development program manager Andi Baldonado said the foundation hoped the screenings would not only raise  awareness of the Philippine eagle, but also help gather funds for the different initiatives by the group to save the bird.

Based in Davao City, the foundation is dedicated to recovering the eagle’s declining population and preserving its habitat through conservation breeding, research and education.

It also partners with indigenous communities to protect the dwindling forests they share with the eagles and other species.

The eagle appears on the Philippine National List of Threatened Species. Fewer than 400 pairs remain in the wild.

A breeding pair rears only a single offspring every two years and needs up to 13,000 hectares of forest territory.

Dennis Salvador, PEF executive director, said resources remained the biggest challenge for the foundation, which now hosts 32 eagles in its 8.4-hectare center on the outskirts of Davao City.

Despite the foundation’s efforts, the threats to the eagles in the wild, such as habitat loss and hunting, remain.

“We have already lost more than 50 percent of young birds,” Salvador said in a packed screening event in Quezon City on Monday. “If the present threat continues, the population will crash because there will be no new population to replace it.”