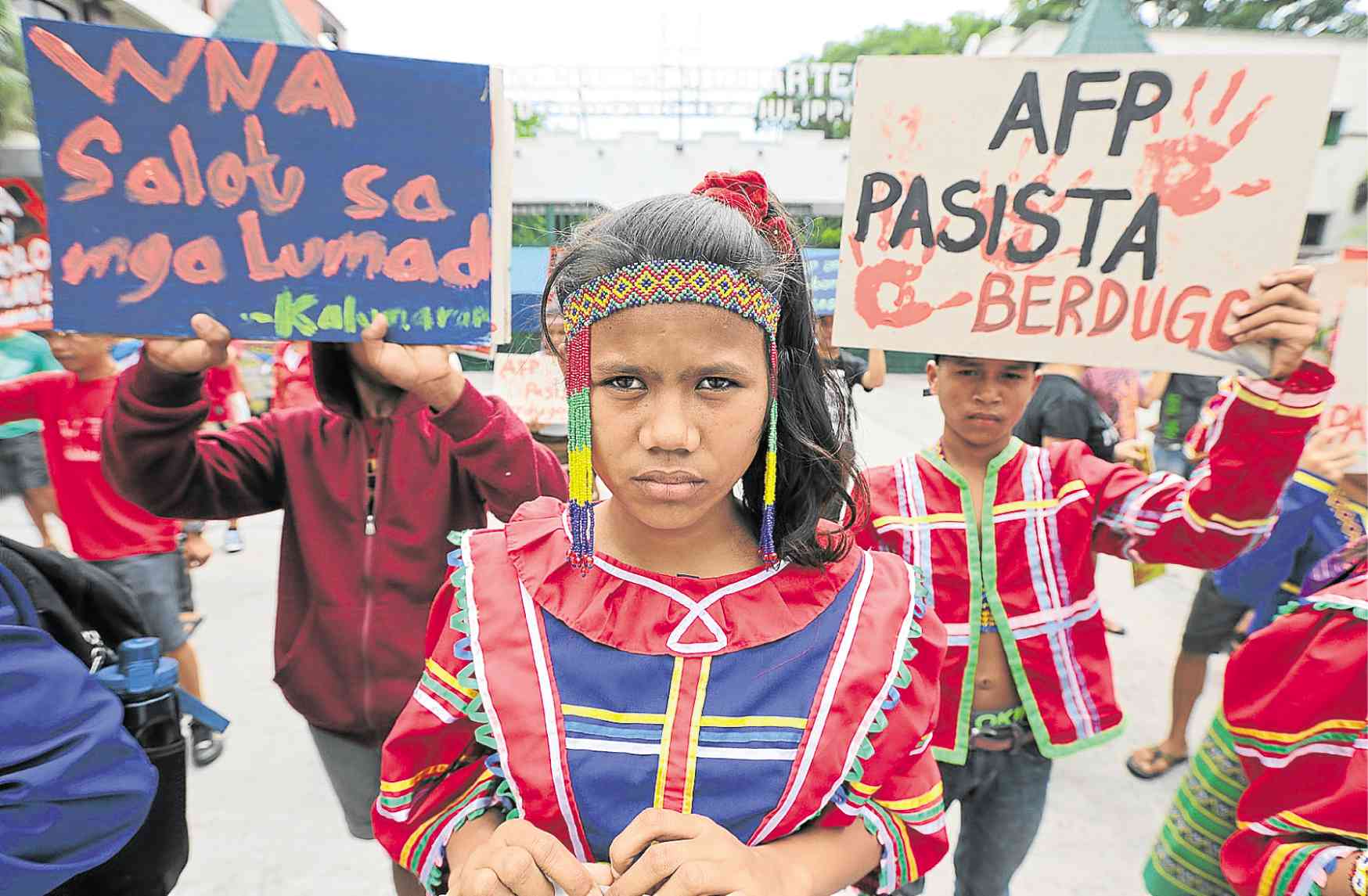 ‘LUMAD’ PROTEST In this photo taken in April, members of an indigenous peoples’ group from Mindanao stage a protest in front of the Armed Forces of the Philippines headquarters in Camp Aguinaldo, Quezon City, to decry attacks on “lumad” leaders which they blamed on soldiers. —GRIG C. MONTEGRANDE

DAVAO CITY, Davao del Sur, Philippines — The recent appointment of a retired military officer as head of the National Commission on Indigenous Peoples (NCIP) did not sit well with a “lumad” (indigenous peoples) leader in Southern Mindanao, saying it would lead to a “total sell out” of ancestral lands and at the same time disregard interests of tribal communities.

Kerlan Fanagel, chair of Pasaka Confederation of Lumad Organizations in Southern Mindanao (Davao Region), said they feared that retired Col. Allen Capuyan would serve as President Rodrigo Duterte’s “rubber stamp” in the NCIP to execute plans of attracting foreign investors that would displace the lumad from their lands.

“We perceived his appointment as a total sell out of our ancestral lands to foreign investors who like to mine and exploit the natural resources in our [communities],” Fanagel told the Inquirer in a telephone interview on Wednesday.

The NCIP is tasked to protect and promote the well-being and interest of indigenous peoples, their beliefs, traditions, institutions and customs.

Fanagel also suspected that Capuyan’s appointment was part of the government’s counterinsurgency plan, amid resistance among Mindanao’s lumad communities over encroachment on their ancestral domains.

Capuyan’s appointment as NCIP chair was signed by President Duterte on May 27 but it was only announced by Malacañang on Tuesday.

Capuyan was assistant general manager for security and emergency services of the Manila International Airport Authority when he was linked to a P6.4-billion “shabu” (crystal meth) smuggling controversy in 2017.

He resigned after denying that he provided tariff codes that allowed drug smugglers to skip the X-ray inspection at the airport. 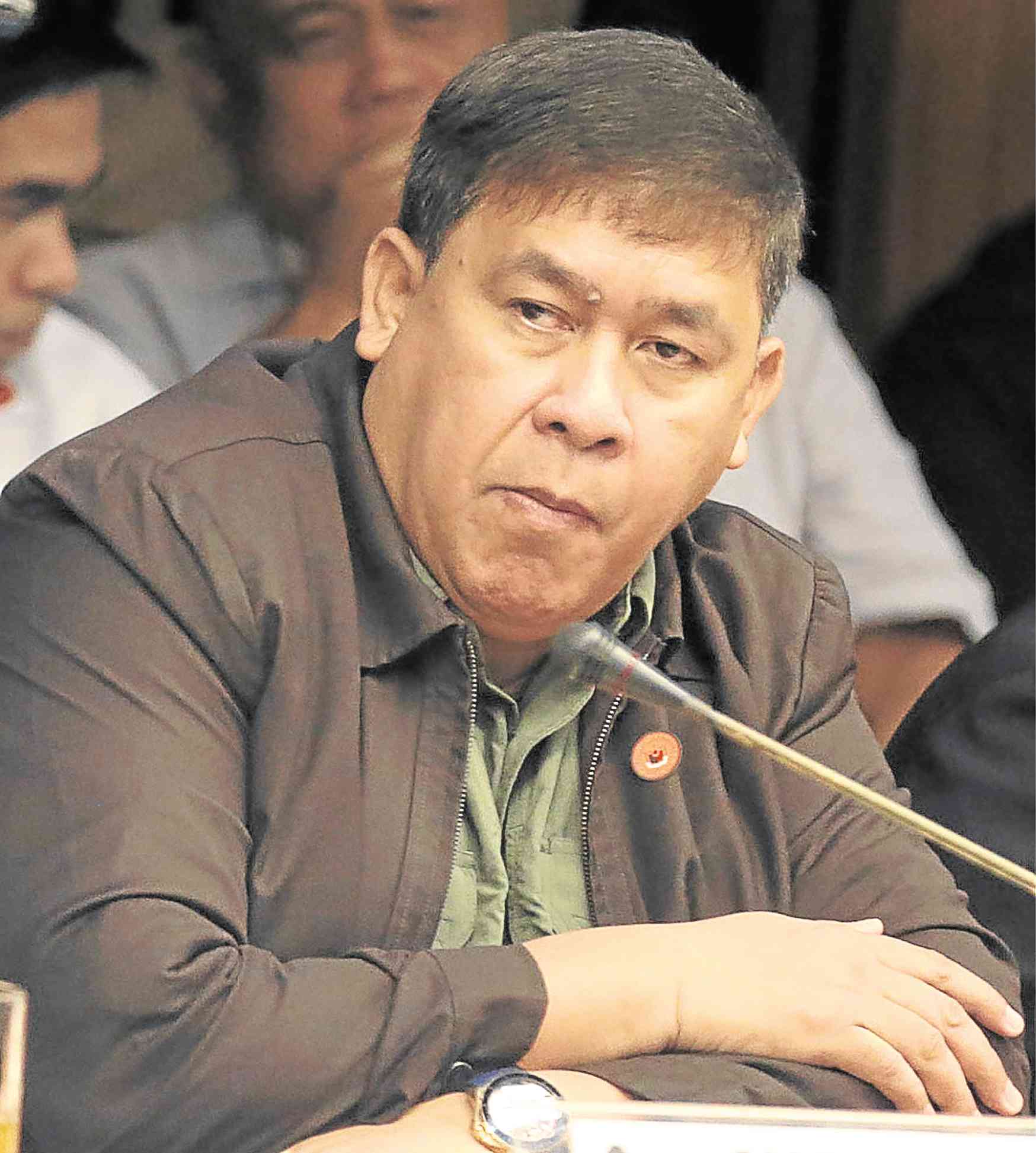 In April 2018, Capuyan was appointed presidential adviser for indigenous peoples’ concerns. In March this year, the President named him executive director of the national secretariat of the National Task Force to End Local Communist Armed Conflict.

Fanagel said Capuyan’s new role as NCIP head would not bring any difference to the plight of the lumad, noting that the agency had failed to address important issues concerning indigenous peoples.

The President, in his State of the Nation Address in July last year, announced he would invite foreign investors to develop lumad lands, Fanagel recalled.

The same idea was broached by the President during a summit of indigenous peoples’ leaders in Davao City in February last year, as he vowed to provide P100 million to fund agriculture development in lumad areas.

Duphing Ogan, secretary general of Kahugpongan sa mga Lumad sa Mindanao (Association of Lumad in Mindanao, or Kalumaran), had said that the President’s statement during the summit had betrayed his real intention to deprive the lumad of their own lands.

Jerome Aba, cochair of Sandugo, a group of lumad and Muslim leaders in Mindanao, had said that since since the President assumed office in 2016, at least 30 lumad had been killed while thousands had been forced out of their communities as the military pursued communist rebels in their areas.

“Injustice will still happen with a military official appointed at the NCIP. The lumad are poised to suffer yet another cycle of abuses and encroachment of their rights because of state policies,” Fanagel said. —With a report from Julie M. Aurelio