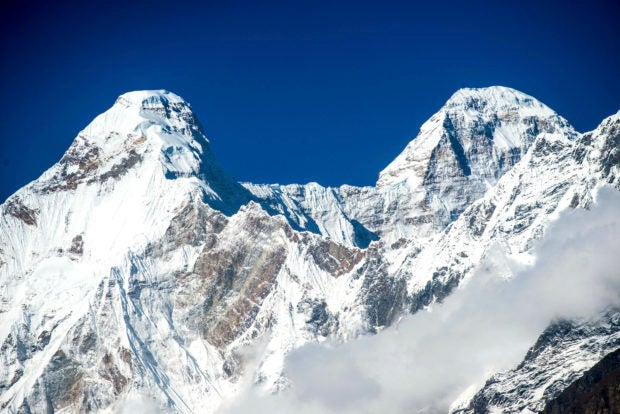 In this Oct. 7, 2016, photograph provided by Juniper Outdoor Pursuits Centre Pvt. Ltd shows Nanda Devi twin peaks which are connected with a razor sharp ridge with a distance of around 2 kilometers running at approximately 6666m height or 22,000 feet., seen from Chaukori in Uttarakhand, India. Indian air force pilots have resumed a search over a Himalayan mountain for a team of mostly foreign climbers missing since late May. The fourth day of the search on Tuesday was taking place in the northern state of Uttarakhand after five bodies were spotted in the snow in high-resolution photos taken Monday. (AP Photo/ Maninder Kohli via Juniper Outdoor Pursuits Centre Pvt. Ltd)

NEW DELHI — Indian officials said they will airdrop mountaineers at a site on a Himalayan mountain where pilots spotted five bodies while searching for a missing team of foreign climbers.

Indo Tibetan Border Police officials said the operation dubbed “Daredevils” was launched Wednesday to retrieve the bodies, which were seen by air on Nanda Devi East in India’s Uttarakhand state.

Officials have said they presume all eight missing climbers are dead.

Veteran British mountaineer Martin Moran led the team of four Britons, two Americans, an Australian, and an Indian liaison officer. Moran’s Scotland-based company said the climbers set out May 13. Contact with a separate trekking team at base camp was lost May 26 after an avalanche.