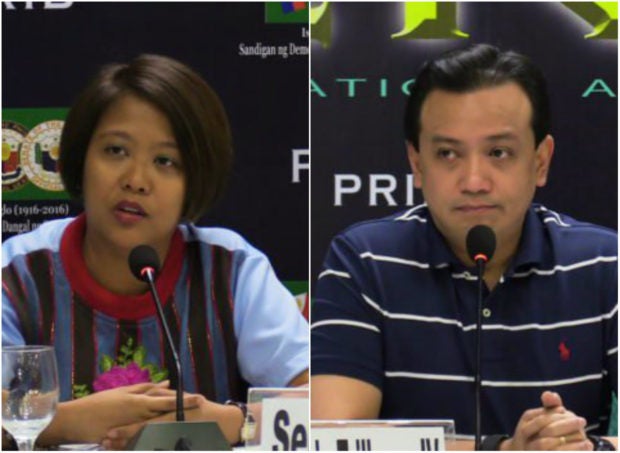 MANILA,   Philippines — It might have been said in jest but Senator  Nancy  Binay has  offered   her erstwhile  foe, Senator Antonio  Trillanes   IV,  a teaching job at the Makati  University plus free  hospitalization at the Ospital ng Makati.

“Senate camaraderie at its best in the 17th Congress: Sen Nancy Binay offered graduating Sen Trillanes a teaching job at the University of Makati with 24-hr free parking at the Makati parking lot, plus free admission to the Ospital ng Makati and free burial in the Makati cemetery,”  Lacson  wrote.

In various media interviews,  Trillanes mentioned about the possibility  that he would join the academe to teach  after his term in the Senate expires on June 30.

Lacson, in a text message, confirmed that    the teaching job and free hospital offer to Trillanes was real, except the free parking and free burial, which he only added in the story.

“Totoo yun pero katuwaan lang sa (Senate) lounge,” he said. “Sen. Binay has informed us that she offered graduating Sen. Trillanes a teaching job at the Makati University and free hospitalization at the Ospital ng Makati.”

Among the subjects of the  probe  were the alleged  overpriced parking building in Makati as well as the  alleged questionable   deals of  the Makati  University with private  corporations.

The  probe  against the Binays took place ahead of the 2016 elections where the former Vice President ran and  lost to President Rodrigo Duterte.

It was only last year when   Trillanes and Nancy  Binay  decided to put their differences aside.

“In all my 15 years in the Senate, this batch is above par in camaraderie, and that includes both the majority and minority, regardless of some tense moments on the floor,”  Lacson said after  the outgoing senators  bid them goodbye before Congress adjourned sine die Tuesday night.

“I attribute this atmosphere mostly to the leadership style of SP Sotto, and I am not trying to be generous to him when I say this,” he added, referring to Senate President Vicente “Tito” Sotto III.