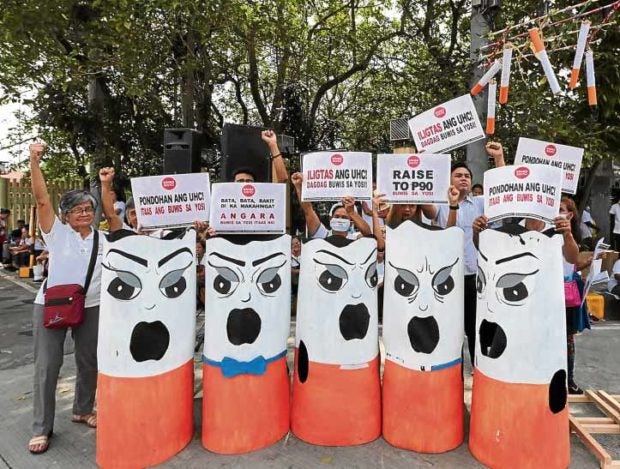 ENOUGH WITH THE PUFF Raising the tobacco tax to P60 will help discourage cigarette use and save the lives of some 460,000 Filipinos, according to the World Health Organization, a view shared by these opponents of smoking. —GRIG C. MONTEGRANDE

MANILA, Philippines — The bill raising the excise on tobacco products is only waiting for President Rodrigo Duterte’s signature to become law following its final approval by the House of Representatives and the Senate at the close of the 17th Congress on Tuesday.

The House adopted the Senate version of the bill almost six months after it approved its own version.

Senate Bill No. 2233, which senators approved on Monday night, would increase the excise on cigarettes from P45 to P60 per pack over the next four years.

The two chambers agreed to use the Senate measure in order to do away with a bicameral conference, which would have made ratification impossible given the tight deadline. They adjourned on Tuesday. The next Congress will open in July.

Malacañang on Tuesday assured the public that the President would sign the bill into law once it reached his office.

“Certainly. I think so. Yes, that was certified urgent by him,” presidential spokesperson Salvador Panelo said.

Once enacted, the measure will impose the stiffer excise on regular cigarettes starting next year until 2023, with a 5 percent yearly hike effective Jan. 1, 2024.

It also carries stiffer penalties against illicit tobacco trade, with the monetary fines being increased by five to 10 times or in millions of pesos.

According to economic managers, the government will earn a projected P15 billion in the first year alone.

At least half of the proceeds will be used exclusively for the implementation of the government’s universal health care program.

Panelo said the measure would also discourage cigarette use.

“We need funds apart from trying to discourage people from killing themselves in a way. They say smoking cigarettes causes cancer and is dangerous to one’s health,” he noted.

Raising the tobacco tax to P60 will help save the lives of some 460,000 Filipinos, the World Health Organization said on Monday.

Health Secretary Francisco Duque III earlier said that without a significant increase in the tax, the country was in danger of seeing a surge of 250,000 new smokers yearly.

The Department of Health would also have a hard time curbing the more than 117,000 deaths yearly from smoking-related illnesses, Duque said.

Recent studies showed that about 17 million Filipinos each smoke at least 10 sticks of cigarettes daily.

Portions of the revenue from the higher excise will be allocated and divided among tobacco-producing provinces and used exclusively for programs to promote economically viable alternatives for tobacco farmers and workers.

House Bill No. 8677, which lawmakers approved last December, would have imposed lower tax rates. It would have increased the excise by P2.50 per pack yearly until it reached P45 per pack in 2022, and by 4 percent annually thereafter.

On Tuesday, the senators revisited the final version of the tax measure they had approved after congressmen from tobacco-growing areas threatened to block its adoption in the House.

Sen. Juan Edgardo Angara, who sponsored the bill as chair of the Senate ways and means committee, said the lawmakers agreed to a 70-30 sharing scheme of tobacco-producing regions after local officials from northern Luzon opposed the original proposal of the Department of Finance (DOF).

This means that towns growing tobacco will get 70 percent of the revenue and the provinces, 30 percent.

“But they (congressmen) agreed to have a cap of the share at P17 billion or 15 percent (of the total tax collected),” Angara told reporters.