Gov’t urged: Be in favor of commuters, not cars 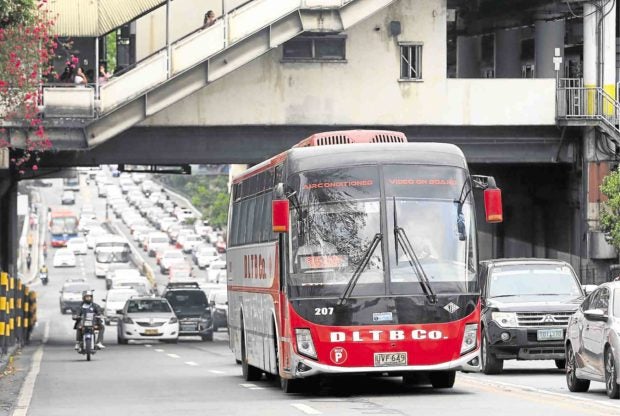 NEED FOR TALKS Agencies in charge of solving the traffic problem must hold consultations with stakeholders first, according to commuter groups. —NIÑO JESUS ORBETA

MANILA, Philippines — As transport regulators scramble to find the right solution to Metro Manila’s worsening traffic problem, commuter groups lamented that these same officials have lost sight of the primary principle of mobility: To strengthen, instead of curb public transit.

This as the Land Transportation Franchising and Regulatory Board (LTFRB) and Metropolitan Manila Development Authority (MMDA) move to restrict UV Express vehicles to operating on a terminal-to-terminal basis and to ban provincial buses and their terminals along Edsa.

Both policies are aimed at decongesting traffic on Metro Manila’s busiest thoroughfare, the agencies said. However, provincial buses and UV express vehicles account for less than 3 percent of vehicular volume on Edsa compared to private cars which constitute 80 percent.

Both the LTFRB and MMDA concede that private vehicles are to blame for heavy traffic. But an effective transport policy isn’t just about decongesting traffic flow but also forming a long-term plan to rationalize a fragmented transport system, LTFRB chair Martin Delgra said in an interview.

This means addressing interconnectivity at the entry points across the metropolis and making clear the delineation between the purpose of a UV Express vehicle and a jeepney.

However, Toix Cerna of the commuters’ group, Komyut, told the Inquirer that both policies seem to be “inadvertently hinged on a procar framework when private cars are the bulk of our problem with traffic congestion.”

Cerna said both the LTFRB and MMDA must be willing to be more responsive to the needs of commuters “instead of being legalistic and just strong-arming the public to suffer the consequences.”

Instead of having just two agencies shape the bulk of the nation’s traffic policies, Congress and local government officials must also help in solving the problem, said Paulo Burros, convenor of policy advocate Bayanihan sa Daan.

For one, lawmakers must move to amend laws that no longer apply to the current situation and introduce new ones that can help in traffic enforcement.

More importantly, mayors must also play a larger role in forming traffic policies since they are the ones most knowledgeable about the public vehicles operating within their areas, Cerna added.

Both the LTFRB and the MMDA claimed that public consultations were held with affected parties about the two policies. But in the case of the UV Express policy, Delgra said they were merely upholding what was in the terms and conditions of the franchise.

While Memorandum No. 2009-19 allowed UV express vehicles to load and unload passengers within a 2-kilometer radius of their terminals, it didn’t amend their franchise which specified that they were “premium services” that operated on a “strictly point-to-point basis,” he explained.

MMDA General Manager Jojo Garcia also said that while they talked to provincial bus operators and drivers about the Edsa ban, it was only about its implementation, not whether they agreed with it.