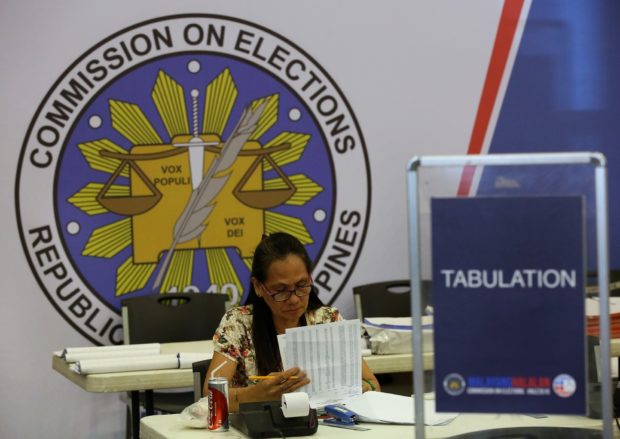 In this file photo, a Commission on Elections staff member sifts through election documents in her corner at the Philippine International Convention Center in Pasay City. Days after the May 13 midterm elections, the poll body is still being asked to deal with complaints about allegedly pre-shaded ballots and malfunctioning vote counting machines. INQUIRER/LYN RILLON

MANILA, Philippines — Outgoing members of the House Minority bloc are eyeing possible criminal charges and impeachment cases against some commissioners of the Commission on Elections (Comelec) if proven they are liable for glitches during the May 13 elections.

In a press conference Tuesday, outgoing Minority Leader and Quezon 3rd District Rep. Danilo Suarez said the “failures” during the midterm polls could be blamed to Comelec and not to technology provider Smartmatic.

“Filing a case may be one option that we can do,” he added, claiming that if there were anomalies in the bidding process, Comelec commissioners could face plunder charges.

During the House public accounts committee hearing last week and Monday, the three questioned the ballot optimization rationale of Comelec in deciding to put party-list names at the back of ballots. They claimed this “disenfranchised” many voters who forgot to vote for party-list.

Bertiz also raised the breakdown of hundreds of vote counting machines provided by Smartmatic, as well as the identification of over a thousand defective SD cards and blotting pens during the conduct of the polls.

READ: ‘There has to be legal basis’ to drop Smartmatic – Comelec spokesperson

Comelec spokesperson James Jimenez said they already held their full payment for S1 Technologies Inc. and Silicon Valley Computer Group, which supplied the SD cards for a contract price of P22.6 million; and the Triplex Enterprises, which provided pens and ballot papers at a cost of P153.8 million pending probe.

Jimenez lamented they were left with no choice but to follow procurement laws and choose the lowest offer from among the qualified suppliers.