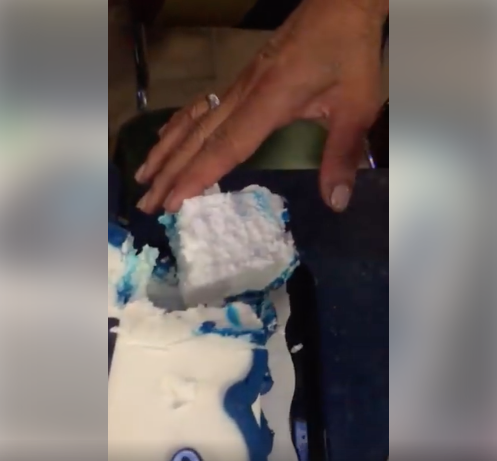 A family failed to have the ideal graduation celebration after being given a “Styrofoam cake” by the store. Image: Screengrab from Facebook/Nellie Flores

A graduation party in Pasadena, Texas ended on a sour note when the celebrating family discovered that the cake they got from the store was made of styrofoam.

According to Nellie Flores, she and her sister Marsy experienced problems when they ordered from Walmart a cake for her niece’s graduation party.

“Walmart on Shaver/Southmore sucks. My sister ordered a 2 tier cake and they lost the order,” Flores stated via Facebook on Friday, May 31.

Store employees told Flores that since the order had been lost, they can offer to give them another cake free of charge.

“There was a small blue [cake], which is her school color so I chose that one,” Flores told KPRC/Click2Houston. “And they said that they will put a couple of graduation things on it and her picture.”

Flores thought that her cake issues were solved until she stumbled into another problem during the graduation party itself.

Walmart on Shaver/Southmore sucks. My sister ordered a 2 tier cake and they lost the order. Then they tell her they will…

“After my niece graduated and [we were] at dinner, my sister [Marcy] goes to cut the cake and it was styrofoam,” Flores said.

After the incident, Flores told KPRC/Click2Houston that she was given a $60 (about P3,100) gift card by Walmart to compensate for the damage.

“But that was still not right,” Flores stressed in her post. “It cannot make up for the embarrassment and humiliation she went through with family and school friends there.”

Meanwhile, the store’s public affairs department told KPRC that the issue “has been resolved” and the incident was merely “a matter of misunderstanding.” Hannah Mallorca/JB

Mother left dumbfounded after buying a loaf of crusts