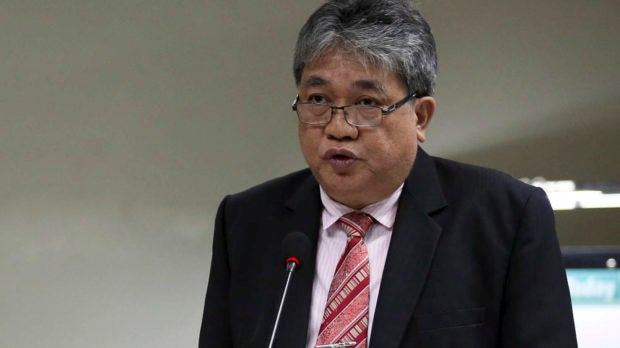 MANILA, Philippines — Malacañang has affirmed with finality the dismissal of Overall Deputy Ombudsman Melchor Carandang over the disclosure of alleged bank transactions of President Rodrigo Duterte and his family that the Anti-Money Laundering Council (AMLC) was supposedly investigating, Justice Secretary Menardo Guevarra said on Monday.

In a statement, Guevarra said Carandang’s motion for reconsideration was denied in an order signed last week by Executive Secretary Salvador Medialdea, acting on the President’s authority.

Carandang can appeal the President’s decision to the Supreme Court.

The Inquirer tried but failed to get a comment from Ombudsman officials.

Medialdea’s decision has yet to be made public but according to excerpts obtained by journalists, Carandang’s appeal was denied because he failed to raise new arguments to defend himself.

“We carefully considered his explanations but found them to be mere afterthoughts and to be overly reliant on technicalities that do not even apply to administrative cases being heard by the Office of the President,” the decision stated.

“We also found his belated attempts to explain his misleading disclosures to the media, which was the basis of the charges against him, to be similarly unpersuasive,” it said.

“In short, none of his arguments warranted a reversal of our findings in the earlier decision,” it added.

Carandang’s dismissal arose from the administrative cases filed last year by Presidential Anti-Corruption Commission member Manuelito Luna and lawyers Eligio Mallari, Jacinto Paras and Glenn Chong for making statements to the media that the AMLC was investigating the President and his family.

The AMLC later denied that it was conducting an investigation. It said it was not the source of the bank transaction documents that Carandang had allegedly released to the media.

The President later ordered Carandang suspended for 90 days, but then Ombudsman Conchita Carpio Morales refused to enforce it, citing a Supreme Court ruling.

Carandang started an investigation of the Duterte family’s alleged illegal wealth in 2017 based on a complaint filed by Sen. Antonio Trillanes IV.

Trillanes released the bank records of the Preisdent during the presidential campaign in 2016.

Then Ombudsman Morales inhibited herself from the inquiry, as the President’s daughter Sara is married to her nephew.

Carandang had said the details in the documents that Trillanes made public during the 2016 campaign were “more or less” the same as the bank transaction history records the Office of the Ombudsman had received from the AMLC.

But these records were used by the AMLC and the Ombudsman for intelligence-sharing purposes, according to Carandang.

Carandang reiterated at the time that the AMLC had yet to furnish the Ombudsman a copy of its own report on the allegation that the President and members of his family had accumulated unexplained wealth.

Documents that Trillanes furnished the media in 2016 showed that from 2006 to 2015, Mr. Duterte held seven joint accounts with his daughter, Sara, at the Bank of the Philippine Islands (BPI) branch on Julia Vargas Avenue in Pasig City, nine joint accounts at the BPI Edsa Greenhills branch and one joint account at Banco de Oro Unibank-1 in Davao City.

The President, according to Trillanes, did not declare at least P227 million in his 2014 statement of assets, liabilities and net worth (SALN).

The President initially denied the existence of the bank account at the BPI branch on Julia Vargas Avenue in Pasig but later admitted that it existed and that it had less than P200 million in deposits.

He also said that he did not declare the big amount in his SALN in 2014 because he had already spent it. —Reports from Jerome Aning, Jerome M. Aurelio and Jhesset O. Enano