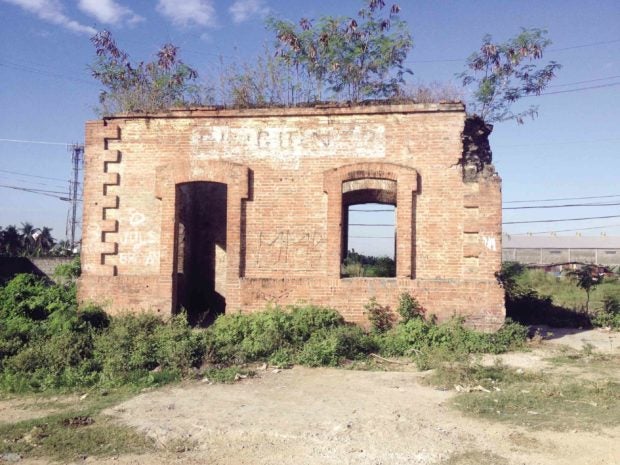 PIECE OF HISTORY The ruins of the Philippine National Railways station in Guiguinto town, Bulacan province, will be among the structures that will be preserved as the government builds a modern railway connecting Metro Manila and Central Luzon. CARMELA REYES-ESTROPE

CITY OF MEYCAUAYAN, Bulacan, Philippines — Construction of the P777-million Philippine National Railways (PNR) North-South Commuter Railway (NSCR) system is on track, and officials say the remnants of old PNR stations built in Bulacan province in 1892 will be preserved.

Junn Magno, PNR general manager, said 10 structures left standing from the old stations would be restored to give a glimpse of the PNR’s history.

He said the structures in this city and in the towns of Balagtas, Guiguinto, Malolos and Calumpit would be renovated to complement the design of the new railway stations.

These ruins are being guarded 24 hours daily to prevent informal settlers from putting up houses and destroying them.

The old PNR trains also passed through the towns of Marilao and Bocaue but the structures built here were badly damaged. Historian and author Jose Jaime Corpuz from Marilao said negligence on the part of the local government largely contributed to the damage.

Perfecto Martin, head of the cultural and heritage group “Kabesera ng Bulakan,” said the PNR’s effort to preserve the damaged stations would “help bring back the glorious past” of the old railway system.

On May 20, Transportation Secretary Arthur Tugade and officials of Taisei Corp. and D.M. Consunji Inc. signed the contract for the civil works of the PNR Clark Phase 1 (Tutuban to Malolos).

Tugade said the government had already secured 90.1 percent of the right of way for six train stations scheduled to be built under Package 1 of the initial phase.

Expected to be operational before the end of 2021, the PNR Clark Phase 1 is cutting travel time to Manila from 1.5 hours to 30 minutes.

The 147-kilometer NSCR system will have 36 stations from Clark International Airport in Pampanga province to Calamba City in Laguna province. The south line will run from Manila to Laguna. —Carmela Reyes-Estrope