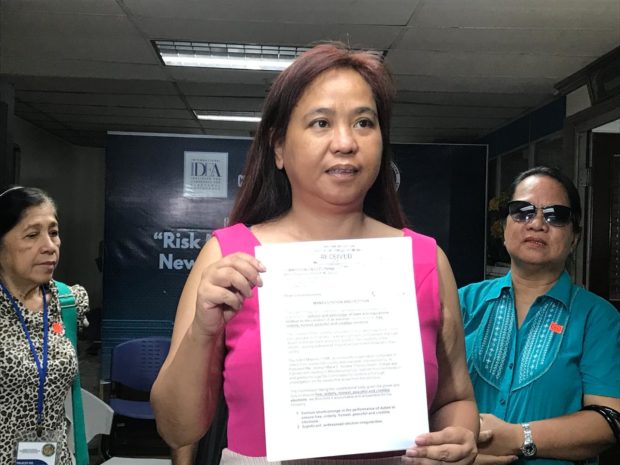 The Silent Majority President Jocelyn Marie Acosta files a petition-manifestation before the Commission on Elections as it seeks transparency on election related issues. PHOTO by Faye Orellana / INQUIRER.net

MANILA, Philippines — The Commission on Elections (Comelec) has been urged to be transparent about the issues hounding the vote-counting machines (VCM) and SD cards in the recently concluded midterm polls.

In a seven-page petition-manifestation, The Silent Majority (TSM) on Monday asked the Comelec to explain and release to the public the specific areas that reported technical foul-ups that ranged from corrupted SD cards and defective VCMs.

Other groups also made similar calls to the Comelec.

TSM President Jocelyn Marie Acosta said that she filed the petition in order to “pressure” the Comelec in giving answers to the demand of the public on transparency.

“We are not candidates. We’d like to impress to the Comelec that voters are stakeholders too, perhaps the most important one,” Acosta said in an interview.

“Also, it’s important that the Comelec sees pressure from multiple groups so that they will act with urgency,” she added.

According to Acosta, her group did not endorse any candidate during the midterm elections but later admitted that the group supports Otso Diretso candidates or the opposition slate.

Under the petition, the group said that the Comelec should be accountable and answerable to the “significant and widespread election irregularities.”

Apart from this, the Comelec should also explain the “serious shortcomings in the performance of duties to ensure free, orderly, honest, peaceful, and credible elections.”

With this, the Comelec should conduct manual audits of precincts affected by the defective VCMs and SD cards for transparency purposes, the group said.

“We trust that the Commission will place importance on the serious concerns of its constituents and driven by a strong sense of duty towards these constituents, respond to our call,” the petition read.