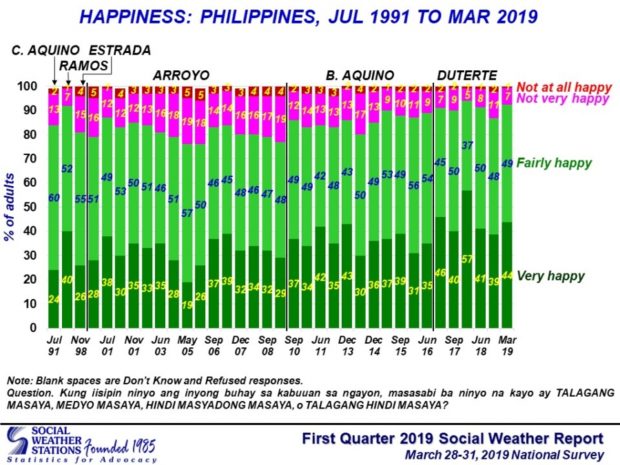 According to the survey, 44 percent of Filipinos consider their lives to be ‘very happy.’ This is a five-point increase from the 39 percent who said the same in the last quarter of 2018.

“Prior to this, it had been declining for two consecutive quarters since the record-high 57 percent in December 2017,” the survey noted.

Meanwhile, the number of Filipinos who consider themselves ‘fairly happy’ with their lives also slightly increased from 48 percent in December 2018 to 49 percent in March 2019.

Likewise, the number of Filipinos who consider themselves ‘unhappy’ declined to 8 percent in the first quarter of the year from 11 percent in December 2018.

Are you satisfied with your life?

The number of Filipinos who are ‘very satisfied’ with their lives also increased from 34 percent in December 2018 to 37 percent in March 2019.

There was also an increase among those who are ‘fairly satisfied’ with their lives from 48 percent in December 2018 to 53 percent in March 2019, the highest since the 55 percent recorded in April 2016.

The number of Filipinos who are unsatisfied with their lives also recorded a seven-point decline to 11 percent.