BEIJING – Thirty years since the Tiananmen Square protests, China’s economy has catapulted up the world rankings, yet political repression is harsher than ever.

Hundreds of thousands of Muslims are held in re-education camps without charge, student activists face relentless harassment and leaders in the beleaguered dissident community have been locked up or simply vanished.

Religious groups face ever greater pressure to conform, and a web of mass surveillance is bolstering a system many call totalitarian. 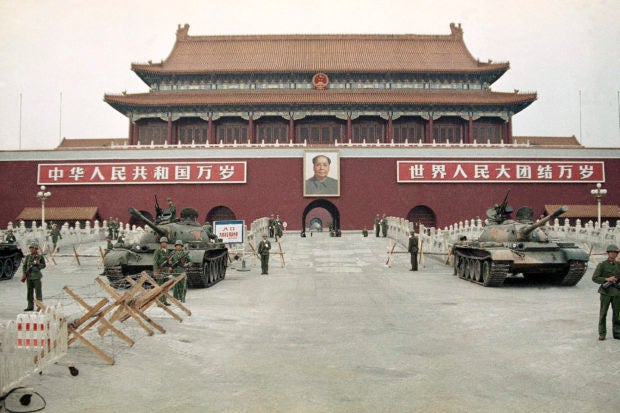 FILE – In this June 10, 1989 file photo, People’s Liberation Army (PLA) troops stand guard with tanks in front of Tiananmen Square after crushing the students pro-democracy demonstrations in Beijing. Thirty years since the Tiananmen Square protests, China’s economy has catapulted up the world rankings, yet political repression is harsher than ever. (AP Photo/Sadayuki Mikami, File)

It’s a far cry from the hopes of the idealistic student demonstrators, and a level of control far beyond what many imagined possible, even after the army’s bloody crushing of the protests on the night of June 3-4, 1989.

Critics say the Tiananmen crackdown, which left hundreds, possibly thousands, dead, set the ruling Communist Party on its present course of ruthless suppression, summary incarceration and the frequent use of violence against opponents in the name of “stability maintenance.”

“The June 4 incident changed the direction of Chinese history,” said Zhang Lianwei, who in 1989 was a scholar at the Chinese Academy of Social Sciences.

“The narrative that China would grow strong and normal, become a stable country through a process of political reform, was destroyed.”

Chinese officials routinely respond to questions about the suppression by pointing to the economic progress China has made.

In the three decades since the protests, China has risen to become the world’s second-largest economy and is forging ahead in areas from high-speed rail to artificial intelligence and 5G mobile communications.

China’s navy now sails around the globe, its space program has launched half a dozen crewed missions and its sprawling cross-border infrastructure projects are extending its influence from Nairobi to the Netherlands.

Politically, however, the state has never been more repressive.

Restrictions on freedom of speech have been extended from publishing into social media, and the slightest act of perceived defiance can prompt a near instantaneous response from the authorities.

The sprawling domestic security apparatus operates with impunity, coerced confessions are broadcast on state television and prison sentences are handed out on the flimsiest of charges, including “picking quarrels” and “incitement to subversion.”

Calls for even moderate reforms have been attacked or just ignored. An attempt to introduce grass-roots democracy at the village level years ago foundered after the Communist Party refused to concede even a modicum of control.

Deliberative bodies at all levels are filled with party appointees who vote how they’re told, and the national legislature is a mere rubber stamp body, re-electing president and party head Xi Jinping last year by a margin of 2,970 to 0.

Regarded as China’s most powerful leader in a generation, Xi took the opportunity to amend the constitution and remove presidential term limits, making him president-for-life if he so chooses.

While the party is believed to be rife with power struggles, Xi’s ongoing anti-corruption campaign and the threat of heavy prison sentences keep his opponents in check.

In the wake of the Tiananmen crackdown, efforts to supervise the party’s workings and control corruption through the media and public oversight were lost, Zhang said.

While it ushered in the era of new party leader Jiang Zemin under which the economy grew, graft also became endemic, faith in communism was exhausted and interpersonal relationships revolved around sheer personal gain, essentially finishing off what the violent, radical Cultural Revolution had begun almost 20 years earlier, he said.

“The moment the government ordered its army to fire on its own people, it lost its legitimacy,” said Rowena Xiaoqing He, a former Tiananmen protester who teaches about the movement at St. Michael’s College in Vermont. /gg