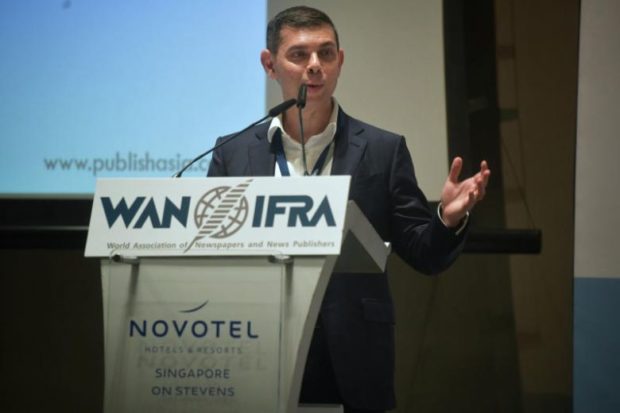 GLASGOW – Mr Warren Fernandez, editor of The Straits Times and editor-in-chief of Singapore Press Holdings’ English, Malay and Tamil Media Group, has been elected President of the World Editors Forum, the network for editors within the World Association of Newspapers and News Publishers (Wan-Ifra).

He was voted in for a two-year term by the Board of the World Editors Forum (WEF) at their annual meeting in Glasgow, Scotland, on Saturday (June 1).

This is the first time that the WEF leadership is moving to Asia and Africa.

“But these also present opportunities we can seize by working more closely together. Part of the answer to these challenges is good quality journalism.

“The World Editors Forum hopes to play a role in helping our newsrooms grapple with these challenges by sharing experiences and best practices, and making the wealth of ideas and research from Wan-Ifra more widely available,” he added.

WEF is the world’s leading network for print and digital editors of newspapers and news organizations around the world, built on a commitment to defend press freedom and promote editorial excellence.

It was established around two decades ago and has since built up a network of editors around the world who focus on building capacity of newsrooms through training, innovative practices, conferences and sharing of experiences.

It is part of Wan-Ifra – the global organization of the world’s press, which represents more than 18,000 publications, 15,000 online sites and over 3,000 companies in more than 120 countries.

Sharing his agenda, Mr Fernandez, 53, said: “One of the key things we aim to do is to step up and make the case for the importance of professional newsrooms in delivering the quality and credible content that is so critical to the proper functioning of our societies, especially in our complex and rapidly changing world today.”

He added: “By celebrating the work of journalists and newsrooms around the world, and the difference they are making, we hope to inspire our newsrooms and give them a sense of purpose for the crucial work that they do.

“We are also planning to endorse and build on the efforts by our Canadian colleagues, who have launched an annual World News Day, to showcase the work of professional newsrooms around the world and raise awareness of why this is so critical.”

Last month, Mr Fernandez was nominated chairman of the WEF Asia Chapter, which was established on May 8. The regional alliance comprises editors from 15 news organisations, based in Asia.

Mr Dave Callaway, the outgoing WEF President, said: “Warren and Toyosi’s elections ensure WEF is in good hands as we encounter the challenges of the next two years. With media freedom under attack from all sides, a diverse, experienced leadership is what we need to help bring our industry together and take it forward.”