‘Tank man’ photographer urges China to open up on Tiananmen 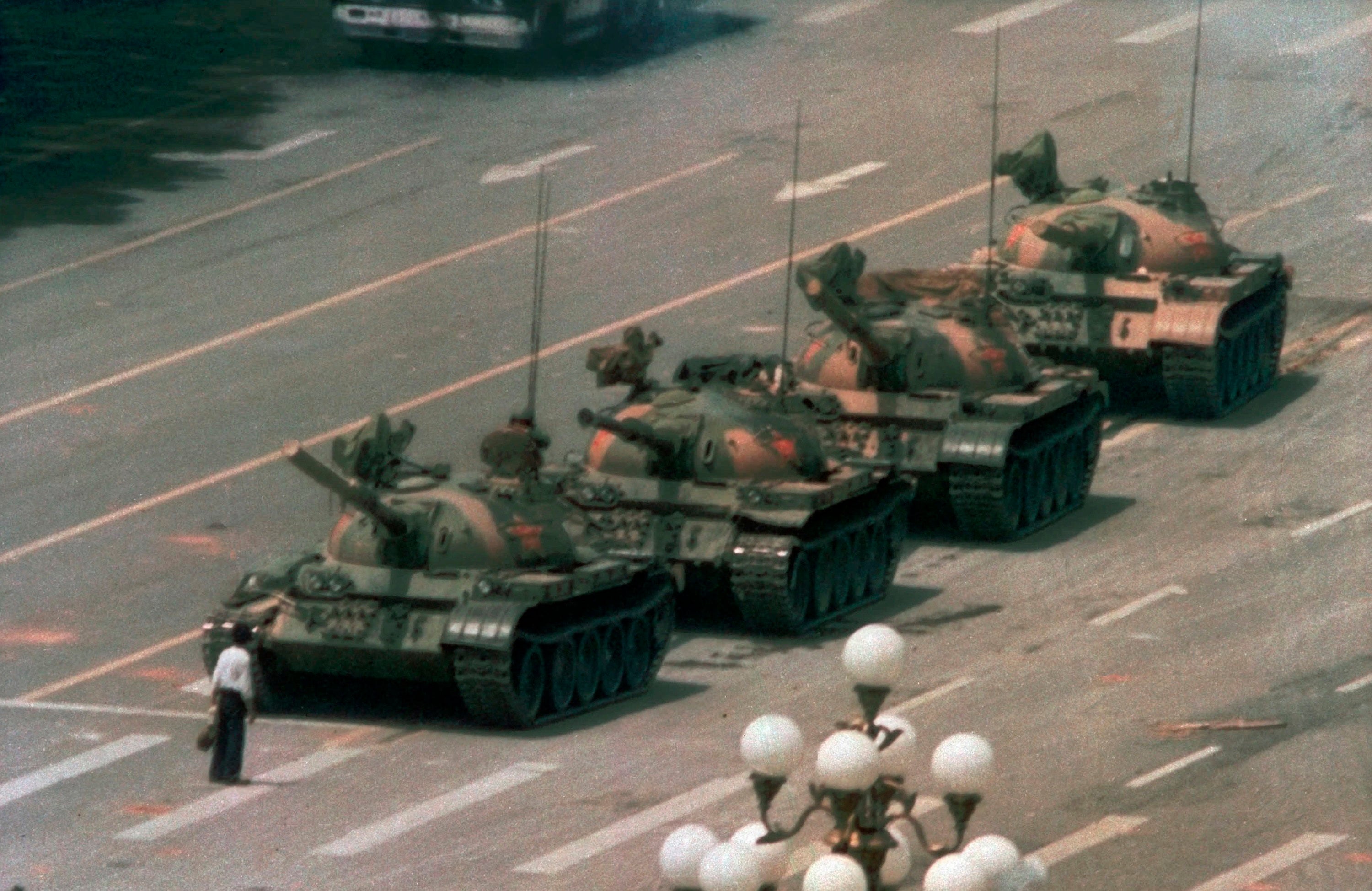 FILE – In this June 5, 1989, file photo, a Chinese man stands alone to block a line of tanks heading east on Beijing’s Changan Blvd. in Tiananmen Square on Jeff Widener who created the iconic image of “tank man” says its time for China’s government to “come clean” about the bloody events of June 3-4 1989. (AP Photo/Jeff Widener, File)

ALHAMBRA, Calif. — The American photographer who shot the iconic image of a man standing in front of tanks at the 1989 Tiananmen protests says it’s time for the Chinese government to come clean about the bloody events of 30 years ago.

Jeff Widener was an Associated Press photo editor based in Bangkok when he was called in to help cover a growing student-led pro-democracy movement centered on Beijing’s Tiananmen Square. 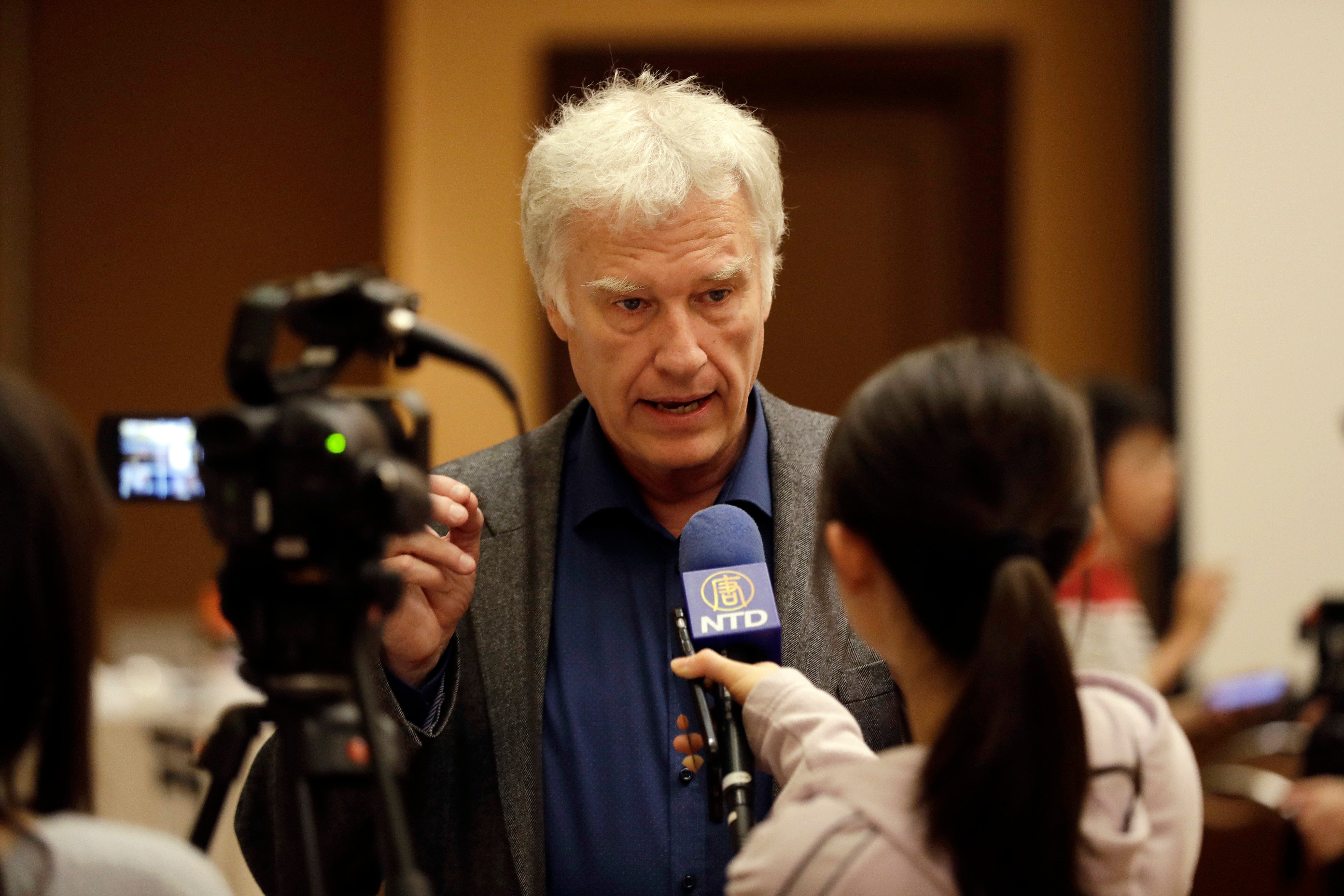 In this Friday, May 24, 2019, photo, former Associated Press Southeast Asia photo editor Jeff Widener speaks during an interview in Alhambra, Calif. Widener who shot the iconic image of a man standing in front of tanks at the 1989 Tiananmen protests says it’s time for the Chinese government to come clean about the bloody events of 30 years ago. (AP Photo/Marcio Jose Sanchez)

The day after the military crushed the protests on June 3-4, Widener took the shot of an unknown man holding shopping bags facing a row of tanks. The photo of “tank man” became one of the most famous images of defiance of the 20th century.

In an interview, Widener said he doesn’t understand why China’s leaders won’t admit to errors made and reveal the truth behind the crackdown.

“The United States and European countries have made mistakes throughout history and they’ve reconciled those problems,” Widener told AP.

“I think it’s time for China to move forward and just come clean on what happened, report to the family members what happened to their loved ones so that they can put this to rest,” he said. “I think that’s the right, decent thing to do.”

The 62-year-old Californian developed a love of photography at a young age, eventually joining AP as Southeast Asia picture editor.

Rejected for a journalist visa at the Chinese Consulate in Bangkok, he flew to Hong Kong, where he got a tourist visa through a travel agency, and made it through customs in Beijing with a mobile darkroom in his luggage.

With the protests in full swing, he developed a daily routine of riding a bicycle early in the morning to Tiananmen Square, where thousands of students were camped out.

His May 30, 1989, photo captured the “Goddess of Democracy,” the students’ version of the Statue of Liberty, facing the portrait of Communist China’s first leader, Mao Zedong, on the massive Tiananmen gate.

“So you had this democracy facing off with Communism that was quite striking,” Widener said.

Soon, the mood began to change. After the government declared martial law, Beijing residents blocked roads to prevent troops — at that time unarmed — from moving toward the square.

On the night of June 3, Widener rode to the square with AP reporter Dan Biers, just as the People’s Liberation Army began fighting its way eastward through barricades and crowds of protesters.

He suffered a serious head injury from a flying piece of asphalt, but made it back to the AP bureau and his hotel.

Widener emerged the following afternoon to find rock-strewn streets, burnt-out vehicles and a population dazed by the violence deployed against them by the government.

Asked to get a shot of military forces occupying the square, Widener headed to the Beijing Hotel, which had vantage points close to the action, even as gunfire continued to pop from parts of the city.

There, he met an American college exchange student, Kirk Martsen, who would play a key role in the tank man tale. Martsen acted as if he and Widener were old friends, allowing the photographer to slip past security men guarding the hotel entrance.

Martsen had a room on the hotel’s sixth floor facing the street, to which he gave Widener access. The problem though, was film. Widener had run out and there was no way to go back to the AP bureau to get more.

Martsen went hunting among the frightened tourists in the lobby, returning two hours later with a single roll that would prove crucial in the events that followed.

Widener stayed overnight, and early on June 5, he rushed to the balcony upon hearing the sound of approaching tanks.

“I started to take a photograph and a guy walks out with shopping bags and I’m thinking to myself, ‘you know this guy’s going to mess up my photograph,” he said. “I mean it really was like I wasn’t thinking clearly.”

“So I just watched him and waited. But they didn’t shoot him. So I thought you know I need a closer shot,” he said.

The man moved at least twice to block the tanks and climbed on the turret of one to converse with a crew member. Eventually, he was whisked from the scene by two men in blue, whose identities, like that of the man himself, have never been revealed.

At least five photographers as well as videographers shot the scene, but Widener’s version became by far the most famous. The photo made him a Pulitzer Prize finalist and was named by Time magazine as one of the 100 most influential images of all time.  /muf

Read Next
China warns Canada of ‘consequences’ of helping US
EDITORS' PICK
OVP: Pilot’s claim vs Robredo ‘never happened’, a ‘malicious fabrication’
Honolulu Café is the cure for your Egg Tarts and Roastings cravings
Petition to reverse Comelec decision on Bongbong Marcos’ DQ case reaches SC
PH detects local transmission of Omicron subvariant BA.2.12.1
House energy committee chair Arroyo bats for cheap electricity
Luxe property: A way to build, preserve wealth
MOST READ
Heart Evangelista gets a ‘no’ from Chiz Escudero after asking, ‘Do I deserve a bag?’
Man posing as Marcos spox revealed to be an inmate in Bilibid — Guevarra
CebuPac places pilot under disciplinary review after ‘baseless’ post vs Robredo
Closure order vs Megaworld Corp halted as firm vows cooperation with BIR – exec
Don't miss out on the latest news and information.