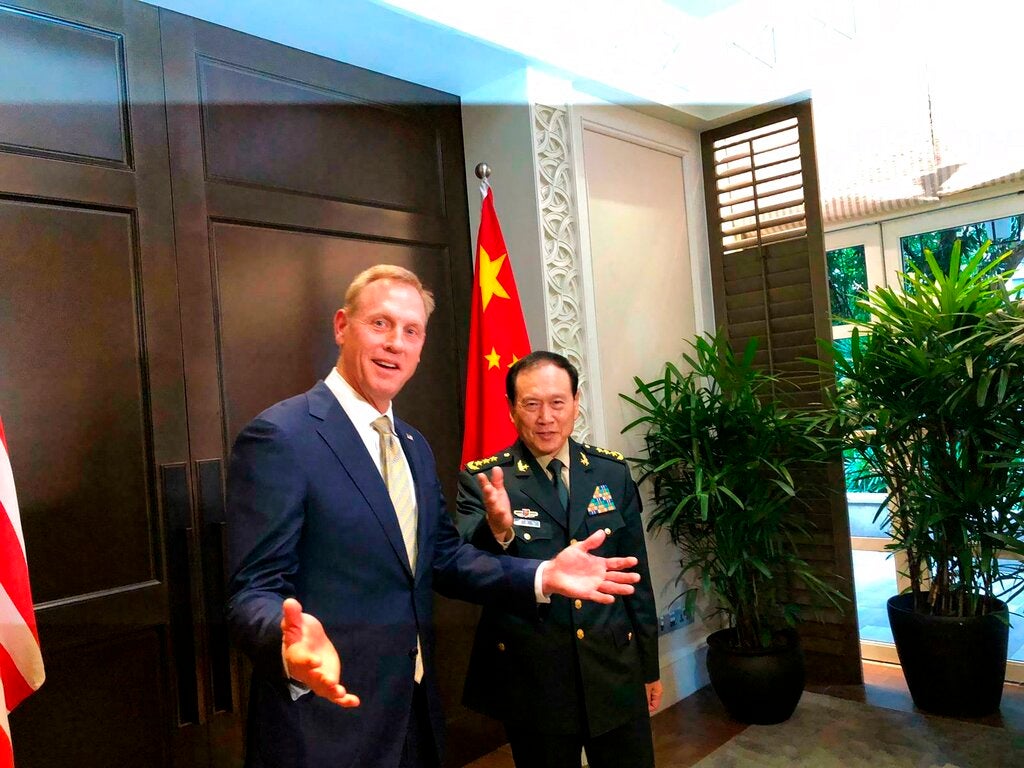 Acting U.S. Secretary of Defense Patrick Shanahan, left, meets with China’s Minister of National Defense Wei Fenghe during a meeting on the sidelines of the 18th International Institute for Strategic Studies (IISS) Shangri-la Dialogue, an annual defense and security forum in Asia, in Singapore, Friday, May 31, 2019. (AP)

In his first major speech on the international stage, Shanahan mixed sharp criticism of China and warnings of North Korea’s “extraordinary” threat with vows that the U.S. will remain strongly committed to the Indo-Pacific region and is ready to invest billions of dollars in securing its stability.

While he didn’t specifically name China in early parts of his speech, he made clear who his target was, making pointed references to Beijing’s campaign to put advanced weapons systems on disputed islands in the region. “If the trends in these behaviors continue, artificial features in the global commons could become tollbooths. Sovereignty could become the purview of the powerful,” Shanahan said.

His remarks underscore America’s frayed relations with China, as the Trump administration wages a trade war with Beijing, imposes sanctions on Chinese tech giant Huawei and approves a weapons sale to Taiwan, the self-ruled island the Communist mainland claims as its own territory. And they reflect America’s new national defense strategy that declared great power competition with China and Russia as top priorities.

Shanahan’s speech on Saturday is also arguably an audition to both the world and U.S. top leaders in Congress, as his nomination for permanent secretary has still not been sent to Capitol Hill by Trump.

And listening closely in the audience were nervous allies and partners in the region who are worried about the economic impact of the U.S.-China trade dispute and the political blowback of America’s complaints about Beijing’s rapid progress in hypersonic weapons, nuclear technology and space launches.

“No one nation can – or should – dominate the Indo-Pacific,” Shanahan told the conference.

He added that the U.S. is willing to cooperate with China and welcomes competition, but said behavior that erodes other nations’ sovereignty and sows distrust of China’s intentions must end.

“Competition does not mean conflict,” he said. “Competition is not to be feared. We should welcome it, provided that everyone plays by internationally established rules.”

Shanahan told reporters Friday that he would use his speech to the Shangri-La Dialogue conference to criticize Beijing’s use of coercion to advance its interests. And he called the island militarization excessive and “overkill.”

Much of his speech centered on America’s work with partners across the region.

But he also called on the Pacific nations to invest in their own futures.

He also will likely face fierce questions from Chinese leaders in the audience, as many U.S. defense chiefs have seen during this annual forum. On Friday, Chinese defense ministry spokesman Wu Qian was both conciliatory and challenging.

Speaking to reporters after Chinese Defense Minister Wei Fenghe’s meeting with Shanahan, Wu noted that the U.S. has recently “had a series of negative words and deeds” on Taiwan issues.

“On the issue of safeguarding national sovereignty and territorial integrity, the U.S. should not underestimate the determination of the Chinese military, will or ability,” he said.

But he also said Shanahan and Wei found room for agreement on the need for denuclearization of the Korean Peninsula and efforts to improve communication between the U.S. and China.

For years, American defense secretaries have used the Shangri-La conference’s podium to condemn China for its militarization of outposts in contested areas of the South China Sea and for conducting cyberespionage against U.S. technology programs. But they have balanced their criticism with calls for cooperation, stability and a rules-based order in the region.

Shanahan told reporters Friday that the U.S. needs to do a better job of describing its level of commitment to the region, including military exercises, training and other activities.

“I do think we have to up our game on talking about interactions,” he said, adding that the U.S. will have a larger presence in the region for various military exercises. “Our responsibility is to show them what we’re actually doing.”