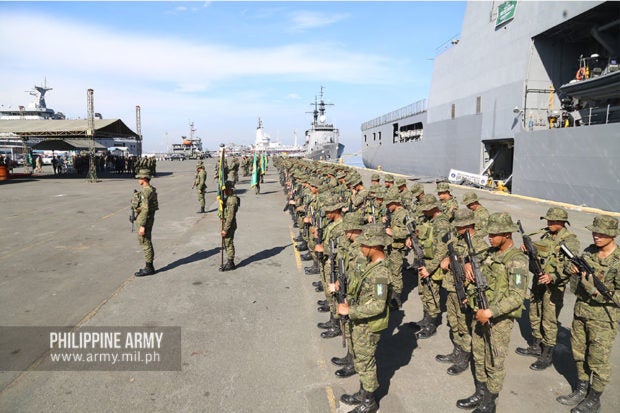 MANILA, Philippines — The Philippine Army on Friday sent one of its best units to Sulu to help address the peace and order problem on the island province.

A ceremony was held at Pier 13 in South Harbor to send off the soldiers of 1st Brigade Combat Team, the unit formed for rapid deployment and territorial defense.

“The men and women of the 1BCT will be deployed in Sulu to ensure peace and security. They are men and women of action and we commend them for going about their mission without much fanfare, an attitude they carry even beyond their service in the military,” said Lt. Col. Ramon Zagala, the Army spokesperson.

The 1BCT is described as the Army’s contingency force capable of addressing conventional, unconventional, and asymmetric threats. It includes an intelligence unit, a combat engineer company, aviation, EOD platoon, 1st Air Defense Artillery Battery, among others.

The 1BCT was activated in late 2018 and is based at Fort Magsaysay, Nueva Ecija. Another brigade combat team will be activated this year. (Editor: Eden Estopace)