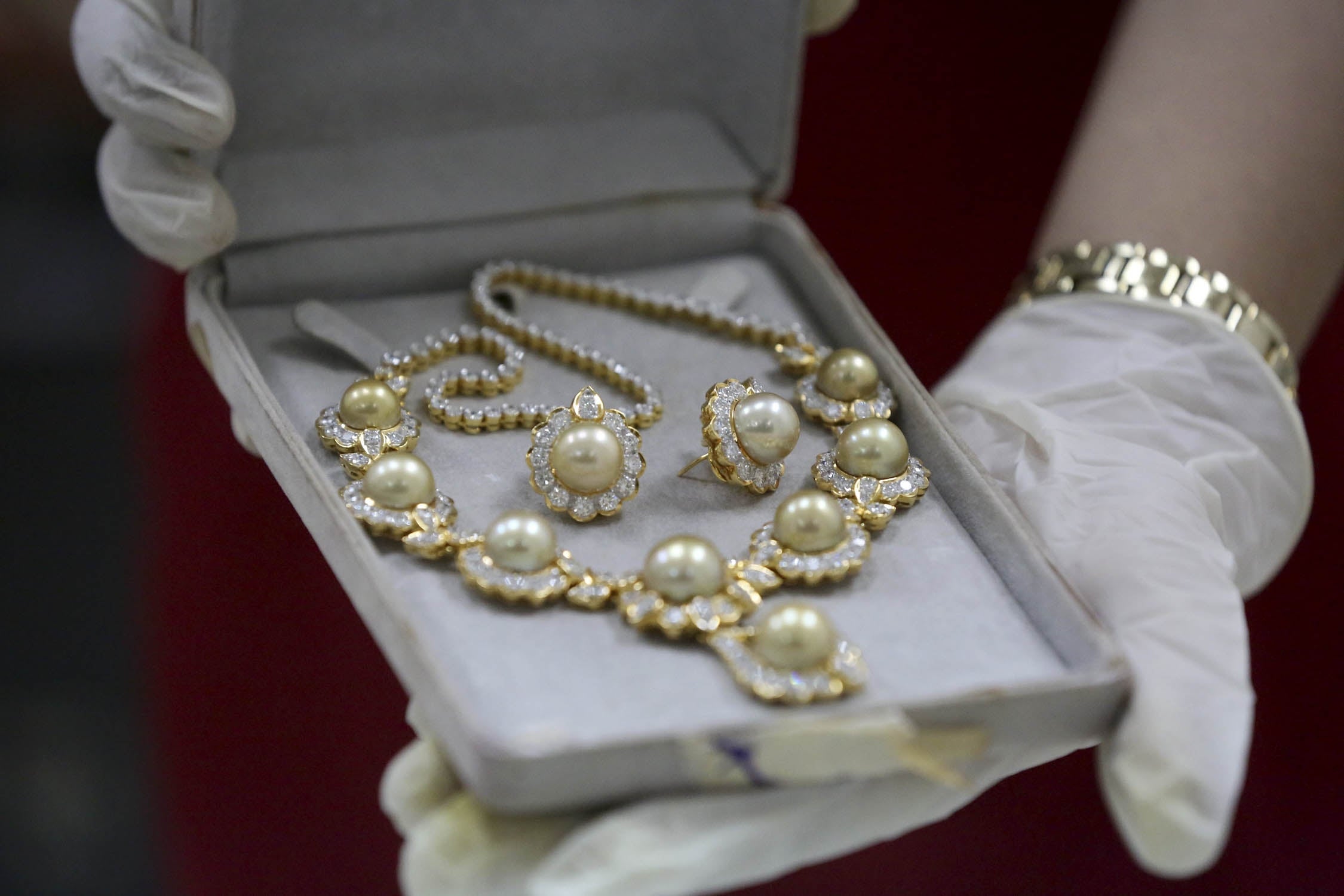 MELDY’S PRECIOUS This diamond necklace with diamond studded pearls and earrings shown to the media onNov. 27, 2015, is
part of the jewelry collection of the Marcos family that may be auctioned off by the Presidential Commission on Good Government
after President Duterte approved the sale. —INQUIRERFILE PHOTO

TOKYO—President Duterte has approved the sale of around P700 million worth of jewelry that formed part of the alleged ill-gotten wealth of the family of dictator Ferdinand Marcos, directing government agencies to ensure that the people would benefit from the proceeds.

Presidential spokesperson Salvador Panelo told reporters on Thursday that he discussed the night before a request by the Presidential Commission on Good Government (PCGG) to sell a Marcos jewelry collection and that Duterte favored the sale.

“He wants the people to benefit from the proceeds of the sale of the jewelry. So I asked him, ‘Are you going to give your go signal to sell?’ ‘Yes. The sale, the proceeds must reach the people,’” Panelo said, quoting the President.

The Palace official spoke with reporters on the sidelines of Duterte’s meeting with the Filipino community at the Palace Hotel in Tokyo.

Asked when Duterte will sign the order to sell the jewelry, Panelo said: “That’s now up to him, as long as he agrees with it.”

“He himself said so last night. I talked to him last night and asked him about it,” Panelo added.

In a letter dated Sept. 7, 2018, the PCGG requested the Office of the President to approve its proposal to sell at auction the “Hawaii Collection,” one of the three jewelry troves of Marcos’ widow, Imelda.

The PCGG sent copies of the letter to Finance Secretary Carlos Dominguez III and Commission on Audit Chair Michael Aguinaldo.

It is also planning to auction off the Marcoses’ real estate properties worth P336 million and stocks worth P40.35 million.

The total value of the alleged ill-gotten wealth included in the planned auctions is P1.081 billion.

The Hawaii Collection, which is being kept at the Bangko Sentral ng Pilipinas, is estimated to be worth P704.8 million, according to the PCGG.

It consists of about 300 pieces of jewelry that were seized by the US Bureau of Customs upon the Marcoses’ arrival in Hawaii, where they fled at the height of the Edsa People Power Revolution in February 1986.

One of the jewels is a 25-carat “extremely rare” pink diamond believed to have been previously owned by a Mogul emperor and estimated to be worth at least $5 million or around P237 million.

Another trove is the “Malacañang Collection” of more than 400 pieces abandoned by the Marcoses at the presidential palace.

The “Roumeliotes Collection,” consisting of at least 60 pieces that  Greek businessman Demetriou Roumeliotes, an alleged  crony of the dictator, tried to smuggle out of the country shortly after  Marcos’ ouster. The jewelry were confiscated by the Bureau of Customs (BOC) at Manila International Airport.

After appraisals by Christie’s and Sotheby’s auction houses in November 2015, the PCGG announced that the value of all three collections then was conservatively estimated to be at least P1 billion.

The Hawaii collection is in  the custody of the PCGG, while the BOC and the Palace are the custodians for the Roumeliotes and Malacañang collections, respectively. —WITH A REPORT FROM INQUIRER RESEARCH