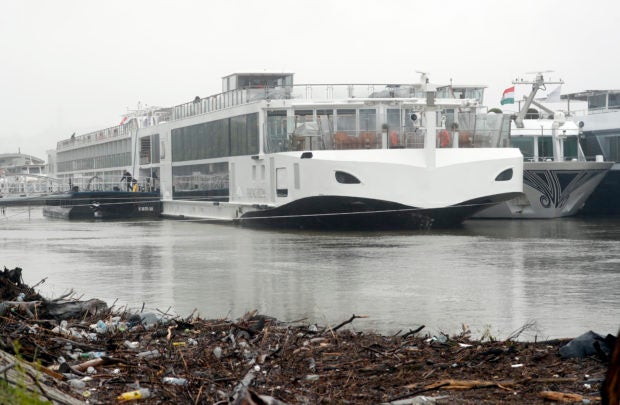 The Viking Sigyn hotel ship is moored following a collision with a sightseeing boat in Budapest, Hungary, Thursday, May 30, 2019. A massive search was underway on the Danube River in downtown Budapest for over a dozen people missing after a sightseeing boat with 33 South Korean tourists sank after colliding with another vessel during an evening downpour. Seven people are confirmed dead, officials said Thursday. (AP Photo/Laszlo Balogh)

BUDAPEST, Hungary — Cruise line operator Viking says one of its ships was involved in a deadly boat collision on the Danube River in Budapest that has left at least seven South Korean tourists aboard a smaller boat dead.

Viking said in a statement Thursday that its ship Sigyn was near a Hungarian tourist boat “when it was involved in an incident” on the river at 9 p.m. Wednesday.

It said no one aboard the Viking ship was injured, and that it is cooperating with authorities. The company, with offices in Switzerland and California, provided no further details.

Officials in Seoul said seven South Korean tourists are dead and 19 others are missing after their sightseeing boat collided with a larger cruise ship and capsized.  Two Hungarian crews are also missing.

Seven South Koreans have been rescued.

A South Korean travel agency said the sightseeing boat was on its way back from an hour-long night tour when it collided with the larger cruise ship that caused the sinking.

Very Good Tour had said earlier Thursday in Seoul that it believed the tour boat was anchored before departure when it collided with the larger cruise ship, citing information from an employee at the scene.

A 6-year-old girl was among 30 South Korean tourists aboard the sightseeing boat.

South Korean President Moon Jae-in has ordered officials to mobilize all available efforts to support the ongoing rescue in cooperation with the Hungarian government. /kga