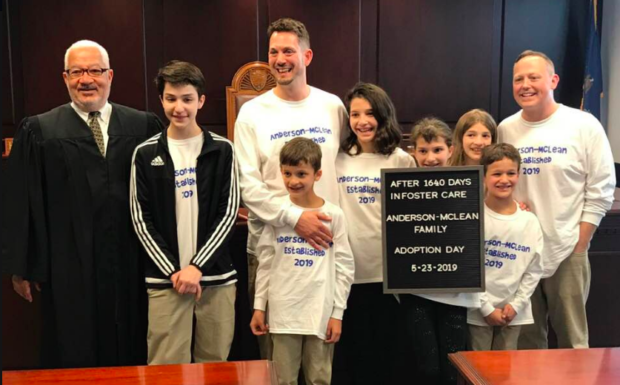 Steve Anderson-McLean and Rob Anderson-McLean adopted the siblings after seeing a similar story on television, as per Good Morning America on May 29. The two dads then decided to do their own research and discovered many sibling groups get separated in adoption.

In the end, they found siblings Carlos, Guadalupe, Maria, Selena, Nasa and Max, who had been in foster care for 1,640 days.

“We instantly fell in love. They’re very easy to make smile,” Steve said in the report. “It was a bad background, a sad story—there was neglect and abuse. It was in the fall of 2017 that parental rights were terminated.”

Steve and Rob were matched with the siblings last June 2018, as per the report, and were officially named as the children’s parents on May 23.

“The judge asked, ‘Do you understand at this point forward they are your children? They are just as much as your biological children,’” Steve recalled. “Obviously we knew that, but when I looked up and saw all those eyes, it was very emotional. We never imagined we’d be lucky enough or blessed enough to have six.”

Prior to the adoption of the siblings, Steve and Rob raised two sons together, 25-year-old Parker and 21-year-old Noah, from a previous marriage. But the couple realized they were not finished with parenting just yet and decided to look into adoption.

The couple, who has been together for 18 years and married for six, marked the special day on social media. Steve shared on Facebook last May 23 photos of them with the judge and the kids, with daughter Lupe holding up a sign that read: “After 1,640 days in foster care. Anderson-McLean family. Adoption day. 5-23-2019.”

“So it’s official! This is the first of many!” Steve announced. “We would like to introduce in order from left to right… Carlos, Nasa, Lupe, Maria, Selena and Max Anderson-McLean!”

So it’s official!! This is the first of many! We would like to introduce (in order from left to right…Carlos, Nasa, Lupe, Maria, Selena and Max Anderson-McLean!! ❤️❤️❤️❤️❤️❤️

It has only been less than a year since the couple have known and been with the kids, but as per Rob, it seems as if they have known them for years.

“We’ve known them for less than a year, but at the same time, it feels as if our emotional bonds were years in the making,” he said. “There are no rules as to what can constitute a family and the love that we share.”  Cody Cepeda /ra