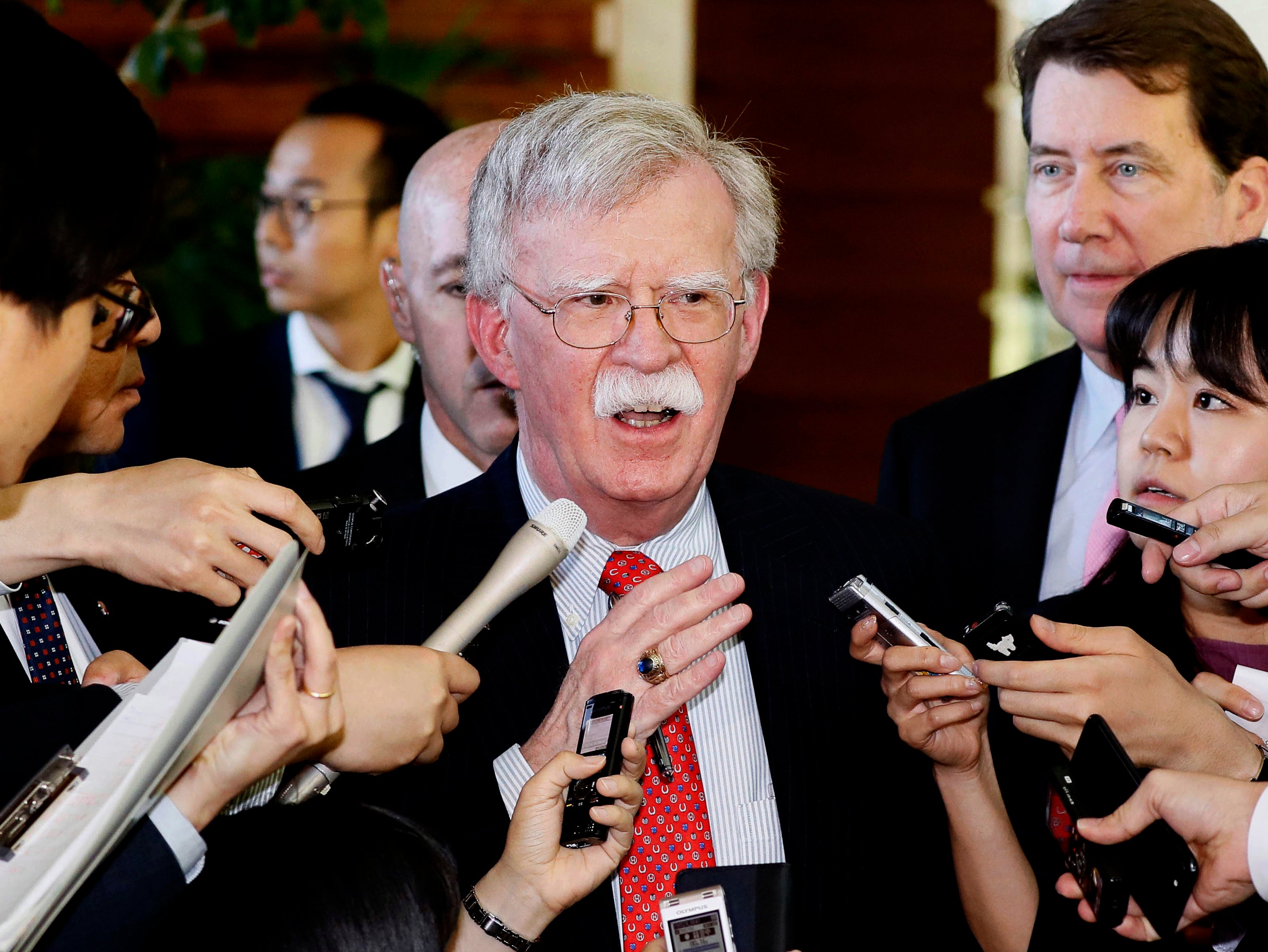 ABU DHABI, United Arab Emirates — Donald Trump’s national security adviser said Wednesday there was “no reason” for Iran to back out of its nuclear deal with world powers other than to seek atomic weapons, a year after the U.S. president unilaterally withdrew America from the accord.

John Bolton, long a hawk on Iran, also claimed — without offering evidence — that the alleged sabotage of four oil tankers off the coast of the United Arab Emirates came from naval mines placed “almost certainly by Iran.”

Speaking in Abu Dhabi, the Emirati capital, Bolton told journalists that there had been a previously unknown attempt to attack the Saudi oil port of Yanbu as well.

However, Bolton stressed that the U.S. has not seen any further Iranian attacks in the time since, something he attributed to military deployments — America recently sent an aircraft carrier and B-52 bombers to the Persian Gulf.

He warned the U.S. would strike back if attacked.

“The point is to make it very clear to Iran and its surrogates that these kinds of action risk a very strong response from the United States,” Bolton threatened, without elaborating.

Saudi officials did not immediately respond to a request for comment about Bolton’s claim on Yanbu, which is the terminus, or end point, of the kingdom’s East-West Pipeline. That pipeline was attacked in recent days in a coordinated drone assault launched by Yemen’s Iranian-backed Houthi rebels.

In recent weeks, tensions have soared as the U.S. beefed up its military presence in the Persian Gulf in response to a still-unexplained threat from Iran.

The U.S. also has accused Iran of being behind a string of incidents, including the alleged sabotage of oil tankers near the UAE coast and a rocket that landed near the U.S. Embassy in Baghdad, while Yemen’s Iranian-aligned Houthi rebels have launched a string of drone attacks targeting Saudi Arabia.

Iran, meanwhile, has announced it was backing away from the 2015 nuclear deal, which saw it limits its enrichment of uranium in exchange for the lifting of economic sanctions. Trump withdrew the U.S. from the accord as he believes it didn’t go far enough in limiting the Iranian nuclear program, nor did it address Iran’s ballistic missile program.

Bolton said that without more nuclear power plants, it made no sense for Iran to stockpile more low-enriched uranium as it now plans to do. But the U.S. also earlier cut off Iran’s ability to sell its uranium to Russia in exchange for unprocessed yellow-cake uranium.

Iran has set a July 7 deadline for Europe to offer better terms to the unraveling nuclear deal, otherwise it will resume enrichment closer to weapons level.

Bolton declined to say what the U.S. would do in response to that but he criticized Iran’s actions.

“There’s no reason for them to do any of that unless that’s part of an effort to reduce the breakout time to produce nuclear weapons,” Bolton said. “That’s a very serious issue if they continue to do that.”

Iran long has insisted its nuclear program is only for peaceful purposes. However, Western powers pushed for the nuclear deal to limit Iran’s ability to seek atomic weapons.

“This is just more graphic evidence that it hasn’t constrained their continuing desire to have nuclear weapons,” Bolton added. “It certainly hasn’t reduced their terrorist activities in the region that we just discussed or their other malign behavior in their use of conventional forces.”

Bolton declined to offer any evidence in blaming Iran for the attacks, citing ongoing investigations.

“Who else would you think is doing it?” he asked rhetorically at one point. “Somebody from Nepal?”  /muf