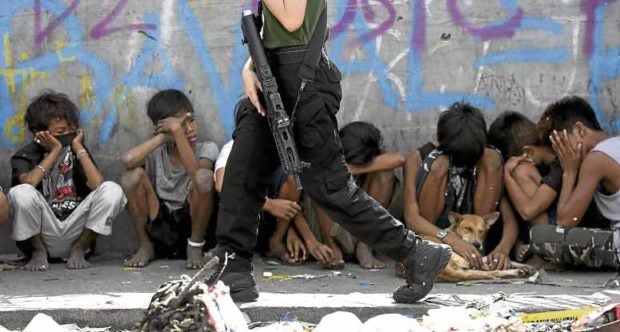 HOPE FOR MINORS? Children, like these minors taken into custody by the Philippine Drug Enforcement Agency early this year,will be rounded up and detained in so-called Bahay Pag-asa run by the Department of Social Welfare and Development,which has received a P1-billion boost to build halfway houses while the government intensifies its antidrug campaign and plans to lower the criminal age to 12 years. —RICHARD A. REYES

MANILA, Philippines A party list lawmaker on Tuesday expressed shock over the P1-billion increase in funding allotted by the Duterte administration for the construction of additional detention centers for child offenders, saying this showed the government penchant for throwing more youngsters in jail.

In a statement, Gabriela Women’s party-list Rep. Arlene Brosas said the government was being “true to its fascist character” by funding the detention of minors in the 2019 national budget.

“Instead of funding basic social services like additional classrooms and assistance to youth, this government would like to fund detention centers of youth offenders who will be rounded up en masse,” she said.

The Department of Social Welfare and Development (DSWD) had originally proposed to allocate P90.6 million for its Juvenile Justice and Welfare Program (JJWP) in the 2019 National Expenditure Program.

That fund was to cover projected expenses in the construction of Bahay Pag-asa (halfway houses) and other JJWP facilities.

In the approved General Appropriations Act, however, the funding for the JJWP ballooned to P1.01 billion, or an increase of more than 1,000 percent, Gabriela said.

The DSWD has been tagged as one of the departments for “parked pork,” where lawmakers supposedly hid millions of pesos in allocations which they would use later as discretionary funds.

Brosas expressed alarm over the spike in the JJWP funding, as Congress supposedly tried to fast-track the passage of the proposed law lowering the minimum age of criminal responsibility (MACR).

“[What would be] the outcome? More kids will be uprooted from their homes and detained in facilities that are far from nurturing and rehabilitative,” she said.

On Monday, the Senate began discussions on Senate Bill No. 2198 to amend provisions of the Juvenile Justice and Welfare Act, including the lowering of the MACR.

Child rights advocates, noted that senators will no longer subject the measure, which is on second reading, to long debates and will instead push for its passage before the 17th Congress closes on June 8.

The Gabriela lawmaker said the P1-billion spike in the budget for the JJWP looked like a “sweetener” for the last-ditch push for the MACR bill.

“This sweetener will not mean the improved implementation of the Juvenile Justice and Welfare Act. Rather, it portends the mass arrests and detention of minors who would be left on their own inside Bahay Pag-asa facilities,” Brosas said.

The Makabayan bloc of lawmakers in the House have opposed the MACR bill, alongside child rights advocates, including the Commission on Human Rights and the United Nations Children’s Fund (Unicef).

They said the measure to lower the MACR to 12 years old would not only fail to solve the pressing issues involving the youth sector but also endanger the safety of children.

“We are making known our opposition because of the crooked means that the government aims to solve the problem of criminality. It wants kids to suffer the consequences of its failed antipoverty programs, failed but bloody war on drugs, and failed interventions to ensure decent jobs and incomes for families,” Brosas said.

The Bureau of Jail Management and Penology (BJMP) has been holding children in detention because some local governments do not have juvenile detention centers.

There were 59 minors in BJMP-run jails nationwide, most of them in Mindanao, as of April this year, according to Jail Chief Supt. Allan Iral in a press conference on Tuesday.

“The BJMP isn’t actually allowed [under the law] to receive [child] offenders anymore, but since some local government units don’t have [juvenile centers], some courts still issue the commitment orders to us,” Iral said.

Most of the minors are being held for drug-related offenses, robbery or crimes against property, and even murder, he said.

The P1-billion additional budget was made during the heated discussions and compromises reached by the bicameral conference committee earlier this year on the controversial P75-billion pork allocations for lawmakers embedded in the then proposed 2019 P3.757-trillion national budget.