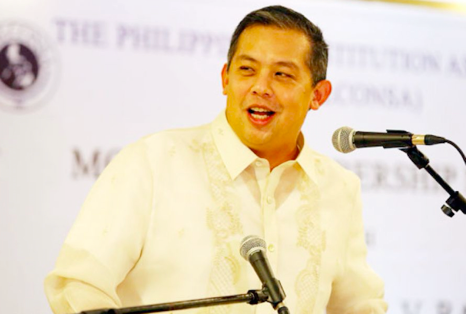 Leyte Rep. Martin Romualdez, a staunch constitutionalist, at a gathering hosted by the Philconsa, of which he is President. INQUIRER file photo

MANILA, Philippines–Leyte Representative-elect Martin Romualdez is appealing to his fellow legislators to “embrace the call for unity” and “set aside politics in the meantime” in order to ensure the country’s high and sustainable economic growth performance.

“The election is over. I am appealing for political ceasefire as this is the time for all Filipinos, including legislators, to embrace the call of unity,” said Romualdez, president of Lakas-CMD and a contender for the Speakership post to be vacated by Speaker Gloria Macapagal-Arroyo.

“We have no choice but to set aside politics in the meantime if we are to move the country’s economy forward. Sayang ang momentum natin kung masisira lang ng pulitika,” said Romualdez, a lawyer and president of the Philippine Constitution Association (Philconsa).

Romualdez proposed that all legislators seeking the Speakership post sign a covenant declaring their commitment to support President Rodrigo Duterte’s priority bills, particularly those that are needed to sustain the economic growth momentum.

“The groundwork for fiscal reform has been set. President Duterte’s fiscal reform is expected to take our economy to the next level of development,” Romualdez pointed out.

“If we achieve the administration’s target of reducing poverty incidence to 14 percent by 2022, our country’s collective economic managers would have, in just two decades from 2001 to 2022, reduced poverty from 39% to 14%. This would be a collective achievement our generation can be proud of,” he added.

Only last month, the Leyte lawmaker noted that the Japan Credit Rating Agency Ltd. (JCR) decided to revise its investment grade credit rating outlook for the Philippines upward, from “stable” to “positive.”

Also last month, market intelligence firm IHS Markit said the Philippines’ continuous growth of above 6 percent over the last seven years is likely to be sustained.

“Strong GDP growth is projected to continue over the medium term, with the total size of the Philippines economy expected to double between 2018 and 2026,” IHS Markit’s chief economist was quoted as saying in the report.

The economic experts, according to Romualdez, attribute the healthy economic performance of the Philippines to President Duterte’s ambitious program of high growth and infrastructure modernization.

“We are on the right track but this should not lull us to complacency. We have a lot of work to do, particularly in enacting economic measures included in the President’s legislative agenda,” Romualdez said.

“To do this, the House of Representatives must stand united behind the President’s vision for economic takeoff and work double-time on his priority economic measures. Every minute is important. There is no time for political bickerings,” he added. (Editor: Jonathan P. Vicente)