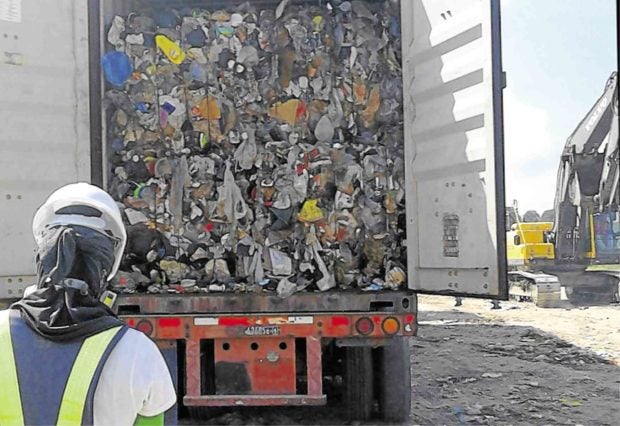 One of the almost 100 containers found to contain garbage from Canada. (Photo from Metro Clark Waste Management Corp.)

MANILA, Philippines — The tons of garbage from Canada illegally dumped in the Philippines several years ago will finally be shipped to its place of origin on May 30, Foreign Affairs Secretary Teodoro Locsin Jr. said on Monday.

In a Twitter post, Locsin said that all garbage containers from Canada had already been “cleaned” and are “ready to go.”

“Waiting for a couple of documents and routine permission from China for transshipment to Canada. Departure is May 30,” he said.

ALL CONTAINERS CONTAINING GARBAGE CLEANED AND READY TO GO. WAITING FOR A COUPLE OF DOCUMENTS AND ROUTINE PERMISSION FROM CHINA FOR TRANSSHIPMENT TO CANADA. DEPARTURE IS MAY 30. Anybody gets in the way one way or another, I will screw you dry. Don't provoke me.

This new schedule for the waste shipment is 15 days later than the original May 15 deadline that the Philippine government had imposed on Canada.

Locsin also issued a warning for “anybody who gets in the way” of the garbage shipment: “I will screw you dry. Don’t provoke me.”

In a series of earlier tweets, the country’s top diplomat shared photos of the garbage containers being fumigated.

Hi ho hi ho. We’re still fumigato. But all 69 containers are in Subic yo. Don’t get in my way or I’ll screw yo. Dry. pic.twitter.com/u2FS4XxaAX

READ: Canadian garbage to be shipped back after fumigation of containers

In a statement last week, the Canadian government said it had awarded a contract to a private firm to safely bring the waste back to Canada “as soon as possible.”

“The company will begin preparation for shipping in the coming days. The removal will be complete by the end of June, as the waste must be safely treated to meet Canadian safety and health requirements,” the Environment and Climate Change Canada (ECCC) said.

However, the Palace rejected Canada’s offer to ship back its trash by the end of June.

Presidential spokesperson Salvador Panelo said in a press briefing last May 23 that President Rodrigo Duterte would “not agree with this”, especially now that the latter had directed that tons of garbage be immediately returned to Ottawa.

“They said it will take [place] end of June. The President will not agree with this. I understand from Secretary [Carlos] Dominguez that it will be set the soonest. The trash will be sent back the soonest,” Panelo said.

The presidential spokesman then later revealed that Malacañang had ordered government officials to refrain from traveling to Canada through a memorandum dated May 20, 2019.

This is to further reduce diplomatic relations with Canada for its government’s failure to take back its garbage.