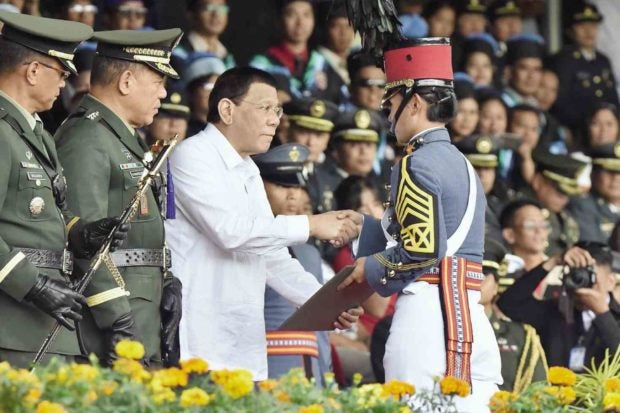 FORT DEL PILAR, BAGUIO CITY, Philippines — Instructing them to serve and die for the country, President Rodrigo Duterte on Sunday commissioned 261 graduates of the Philippine Military Academy (PMA) Class of 2019 into service as junior officers in the Armed Forces of the Philippines.

“Serve your country well. Die for your country if need be. Remember the young Filipinos yet to come, the children… and if you think the country is not run the [right] way and if it will destroy your country, you should know what to do,” the President said during the PMA’s first commencement exercises in May.

Previous graduations were held in March but the academy adjusted its school term in 2018.

“Be good soldiers. Protect the people, secure our sovereignty and preserve the integrity of our national territory,” the President said shortly before a downpour drenched the cadets standing in formation at the Borromeo Field here.

He said the graduates should be humble “[because] nothing beats humility,” and must always be grateful. He also said they must not disappoint Filipinos “who paid for [your education] and who believe in you.”

Toward the end of the graduation program, the President signed an order pardoning infractions committed by underclassmen.

Then he suddenly joked that he was pardoning the cadets for crimes like “rape of women of Baguio.”

“I need good and capable soldiers. ‘Patawarin ko kayo’ (I forgive you),” he said as he urged the cadets with demerits to identify themselves.

“The No. 1 is for rape, the No. 2 is drugs with rape — with robbery. ‘Para sa Muntinlupa ito” (They are bound for the penitentiary in Muntinlupa). Third, rape of women in Baguio — the beautiful ones. ‘Sino iyan’ (Who are these)?”

The heart of the ceremony was provided by newly commissioned Navy Ensign Dionne Mae Umalla, the class valedictorian, whose speech was devoted to her mother Dionisia, who raised her and her three siblings alone.

Her father, Reuben Umalla Sr., became estranged from the family when she was in Grade 2. He attended the graduation, surprising the family.

In her speech, Umalla said she wanted to become a doctor. But after graduating as valedictorian in high school, she said she was confronted by two choices: To pursue a medical technology course or an education course that would train her to be a mathematics teacher.

“I was trapped between my dream and reality… the reality that my mother, a retired teacher, may not be able to sustain my dream of becoming a doctor,” she said as she started to cry.

“Clearly it was not what I wanted,” Umalla said when she enrolled in the education course at a Batangas school. She said she eventually developed a “newfound love for teaching,” but was again frustrated when her mother prodded her to join the PMA.

She recalled her mother telling her to take the PMA entrance exam. “You’ve nothing to lose,” her mom had told her.

The PMA, it turned out, taught her not to set aside her dreams but to turn her “aspirations into reality,” she said. “We became not what we wanted but what we needed to be to serve the country,” she said.

“I may not be a doctor now but the academy made me one when [I was] called to ease the pain of fellow cadets who were going through tough times,” she said.

“[The PMA made me a] teacher when I mentored fellow cadets who were having difficulties with subjects, [and made me] a priest when we shared the Gospel with troubled cadets.”

They also learned to be lawyers when they defended colleagues accused of school violations, and lawmakers when they were tasked with “propos[ing] measures to better the administration of the corps,” she said.

The President, who arrived late for the ceremony, awarded the Presidential Saber to Umalla of Ilocos Sur province.

Umalla, the fifth woman to top the PMA graduating class since 1999, also received a certificate for a house and lot from the President.

The President presented a new pistol to Cadet First Class Danmark Solomon, the PMA goat or the last in the order of merit.