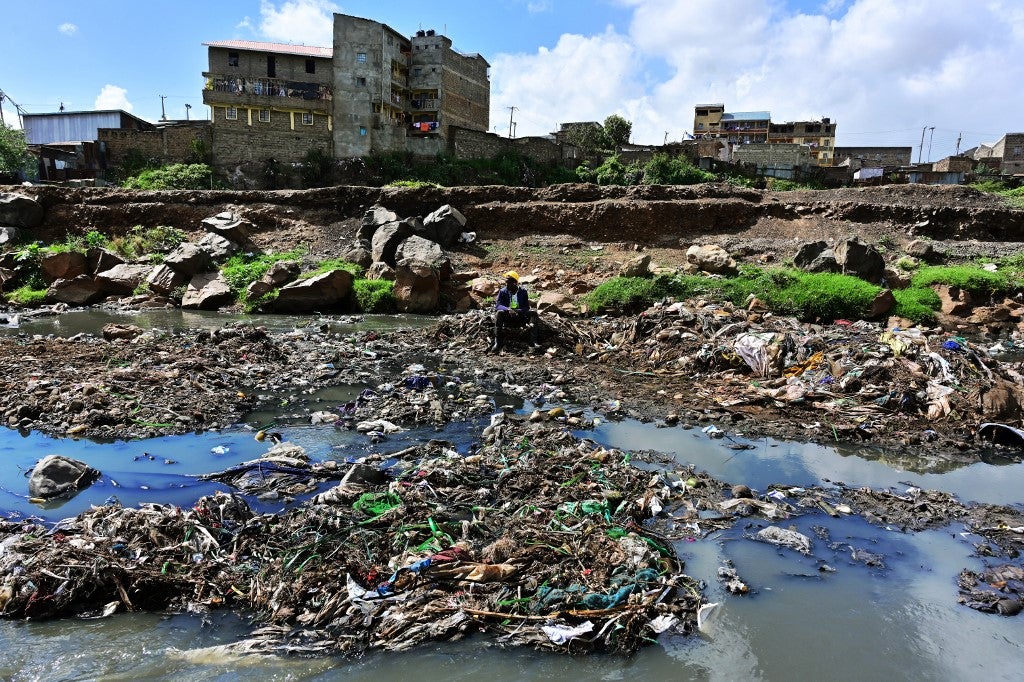 A volunteer takes a break from cleaning out a section of Nairobi river that is adjacent to a micro-recreation park initiated by slum youth that is situated on a section of the bank reclaimed from the heavily polluted waters of the river in Nairobi’s Korogocho shanty town on May 17, 2019, in Nairobi, where at least 69, mostly reforming hoodlums and delinquents, are now etching out a livelihood cleaning up the river and it’s environs. AFP

NAIROBI, Kenya – A major operation to clean up the trash-clogged rivers in the Kenyan capital has led to the grisly discovery of 14 bodies, most of them babies and children, the local government said Friday.

On Friday, clean-up crews found the body of an eight-year-old boy who had been strangled and dumped near the Nairobi River, just days after the bodies of twin babies were discovered in a plastic bag.

“Nairobi county youth conducting cleaning of Nairobi River have today (Friday) found yet another body of a… boy strangled and dumped near the river,” said county government spokesman Elkana Jacob.

“This makes a total number of 14 bodies of adults and infants retrieved from Nairobi rivers since Governor Mike Sonko launched the clean-up exercise,” he said.

Nairobi’s name comes from a Maasai phrase meaning “place of cool waters”, however, the main river and its tributaries have fallen prey to industrialization and chaotic urban planning.

Factories spew industrial waste into the rivers, while dozens of informal settlements with no proper sewage system or trash removal fill them with garbage and human waste.

Sonko announced the latest in a string of clean-up operations over the past two decades in May last year, however, it began in earnest in early 2019.

“These numbers of dead bodies retrieved from rivers are worrying. We have called on the police to investigate these cases. Who are the people behind these senseless killings,” Sonko said in a press statement Saturday.

“Once we have clean running rivers, no one will dump anything into the waters without being noticed. My teams are working round the clock to ensure we achieve what we have decided to do.”

Aside from eight infants and the young boy found Friday, the bodies of five adults were also found during the operation this year in the Nairobi River, and its tributaries the Ngong River and Mathare River.

Fredrick Okinda, chairman of Komb-Green Solutions which is assisting in the cleanup, blamed illegal clinics performing abortions for some of the bodies found. He said some appeared to be fetuses.

“Some hospitals here are doing abortions to young ladies and they don’t have any place to dump the bodies,” he told AFP.

Abortion is illegal in Kenya unless the life of the woman is in danger.

Some of the babies appeared to have been “thrown after being born”, said Okinda.

His organization had buried some of the babies next to the river.

“We are not surprised because you know this is a slum area… so when we come to the cleanup we were ready to face any challenge as long as we reclaim the lost glory of Nairobi River.” /cbb

Read Next
FACES OF THE NEWS: May 26, 2019
EDITORS' PICK
Smart releases Hyun Bin’s second TVC
Current dominant strain of COVID-19 more infectious than original—study
Water remains our saving grace right now
DOLE: Return of OFWs’ remains from Saudi to be ‘delayed,’ deadline moved to ‘early next week’
‘Justice will be done,’ Duterte assures as he vowed probe on Jolo incident to bare ‘truth’
EuroMillions Superdraw: A lottery draw unlike any other is coming to the Philippines
MOST READ
Duterte tells military: No other president looked at you the way I did
BREAKING: Duterte signs anti-terror bill into law
Locsin warns of ‘severest response’ if China’s army drills in SCS ‘spill over’ to PH domain
Vico: Cleanup of bidding process saved Pasig gov’t P415M
Don't miss out on the latest news and information.