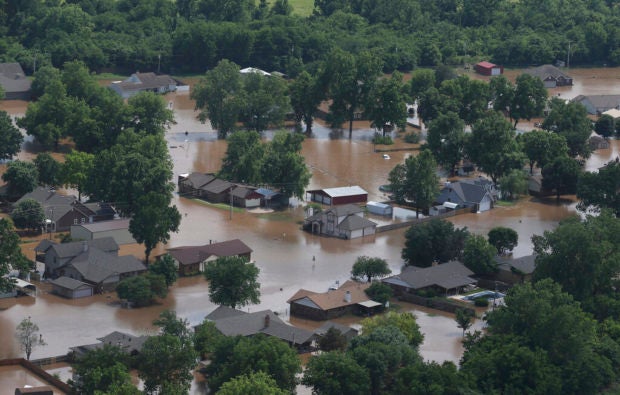 In this aerial image, homes are inundated with flood waters from the Arkansas River near South 145th West Ave near Highway 51 on Thursday, May 23, 2019, in Sand Springs, Okla. Storms and torrential rains have ravaged the Midwest, from Texas through Oklahoma, Kansas, Nebraska, Iowa, Missouri and Illinois, in the past few days. (Tom Gilbert/Tulsa World via AP)

OKLAHOMA CITY — The bodies of a man and a woman were discovered Friday in a submerged vehicle near the Mississippi River in Missouri, bringing the death toll to nine from storms that have ravaged the central U.S. this week and threaten major flooding through the holiday weekend.

John Reinhardt, 20, and Caitlin Frangel, 19, both of Hazelwood, Missouri, were reported missing May 15. Their bodies were found around 4 a.m. on a flooded rural road that runs along the river at Portage Des Sioux, about 40 miles (64 kilometers) north of St. Louis.

“We believe they went into it in the dark, not knowing the roadway was flooded, and they were unable to get out,” Thompson said.

Heavy rain in recent weeks has spurred major flooding in several states. Flooding along the Arkansas River will threaten communities from Tulsa into western Arkansas through at least the holiday weekend, officials said Friday, as water released from an Oklahoma dam combines with additional rain in the forecast.

To control flooding in Tulsa, the U.S. Army Corps of Engineers on Friday began increasing the amount of water being released into the river from the Keystone Dam northwest of the city of about 400,000 people.

“The dam is doing what it is supposed to do. It has maintained the flood to a manageable level,” said Oklahoma U.S. Sen. James Lankford, following an aerial tour of the region.

The river in Tulsa was just above 22 feet (6.71 meters) Friday, four feet (1.22 meters) above flood stage, and was expected to remain at that level through Tuesday. Riverside residents were urged to leave their homes and at least one oil refinery suspended operations.

“The most disturbing thing that I’ve heard in the last 24 hours from our first responders are reports of parents letting their kids play in the river,” said Tulsa Mayor G.T. Bynum. “If you’re a parent that’s letting your kid play in this river right now, you ought to be ashamed of yourself.”

Gov. Asa Hutchinson declared a state of emergency Friday to lift hurdles in what state agencies can do to assist flooded areas along the Arkansas River. The proclamation came after he ordered the state’s National Guard to station high-water rescue teams in the western part of the state by Saturday and the Corps of Engineers warned residents to stay off the river throughout the Memorial Day holiday weekend.

“We hope people are getting to safer areas now,” said Aric Mitchell with the Fort Smith, Arkansas, police department.

“Nearby business, residences could be flooded … it’s going to be a mess,” said National Weather Service meteorologist Pete Snyder. “We’ve not seen it get this high before. It’s a different situation than we’ve ever seen.”

The concerns in Oklahoma and Arkansas follow days of severe storms that exacerbated spring flooding throughout the Midwest and spawned dozens of tornadoes.

More rain with possible tornadoes is likely through the weekend from western Texas through Illinois, according to weather service meteorologist Matt Mosier with the Storm Prediction Center in Norman, Oklahoma.

On Friday evening, a tornado touched down just south of Iowa City, Iowa, the home of the University of Iowa, causing some damage but no injuries. A high school commencement was disrupted by the storm, prompting people attending to scurry to the bowels of a basketball arena in Iowa City while a tornado siren blared.

Floodwaters from the Missouri River topped a levee at Jefferson City Friday and prompted some streets around the state Capitol to be shut down, as residents worked to clean up from one of the twisters, which cut a 3-mile-long path through the city earlier this week.

Jefferson City’s airport already had been evacuated, but other residents and workers drove precariously through flooded roads to escape the rising waters. The Capitol building sits on a bluff on the south side of the river and is not in danger of flooding.

The tornado had also damaged the Missouri headquarters for the Special Olympics, prompting the organization Friday to cancel its summer games. /jpv