China ramps up war of rhetoric in trade standoff with US

BEIJING – Stepping up Beijing’s propaganda offensive in the tariffs standoff with Washington, Chinese state media on Friday accused the U.S. of seeking to “colonize global business” with moves against Huawei and other Chinese technology companies.

There was no word from either side on progress toward resuming talks between the world’s two largest economies, though President Donald Trump said he expected to meet with his Chinese counterpart, Xi Jinping, next month at a G-20 meeting in Japan.

Negotiations over how to cut the huge, longstanding U.S. trade deficit with China and resolve complaints over Beijing’s methods for acquiring advanced foreign technologies foundered earlier this month after Trump raised tariffs on billions of dollars of imports from China. 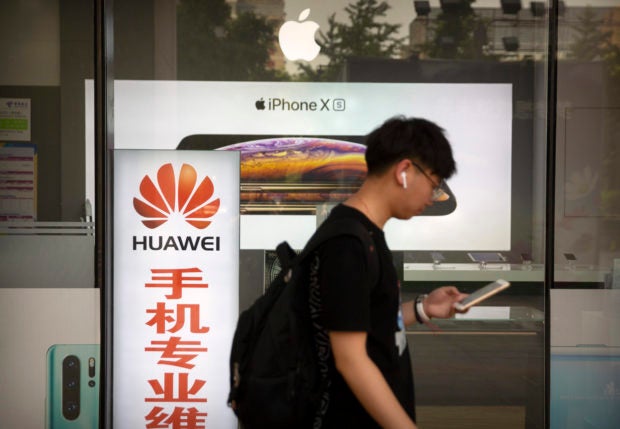 A man looks at his smartphone as he walks past an electronics shop advertising phones from Huawei and Apple in Beijing, Friday, May 24, 2019. Stepping up a propaganda offensive against Washington, China’s state media on Friday accused the U.S. of seeking to “colonize global business” by targeting telecom equipment giant Huawei and other Chinese companies. (AP Photo/Mark Schiefelbein)

The China Daily, an English-language newspaper, said U.S. expressions of concerns about Chinese surveillance equipment maker Hikvision were for the self-serving aim of claiming the “moral high ground” to promote Washington’s political agenda.

“In this way, it is hoping to achieve the colonization of the global business world,” the newspaper said.

Hikvision said in a statement Friday that it takes U.S. concerns about its business seriously and is working to ensure it complies with human rights standards.

Activists have been urging the U.S. and other countries to sanction China over repression of members of Muslim minority ethnic groups in the northwestern Xinjiang region, where an estimated 1 million people are being detained in re-education camps.

The New York Times reported the U.S. Commerce Department might put Hikvision on its “entity list,” restricting its business with U.S. companies for its alleged role in facilitating surveillance in Xinjiang.

In its statement, the company said it had “engaged with the U.S. government regarding all of this since last October.”

Hikvision said it had retained former U.S. Ambassador-at-large Pierre-Richard Prosper of the firm Arent Fox to advise the company regarding human rights compliance.

“Over the past year, there have been numerous reports about ways that video surveillance products have been involved in human rights violations,” the statement said. “We read every report seriously and are listening to voices from outside the company.”

In South Korea, officials said they were discussing security issues related to its 5G, or fifth generation, cellphone networks with the U.S.

Officials in South Korea’s Foreign Ministry and presidential office did not, however, confirm the report by the Chosun Ilbo newspaper that U.S. officials want Seoul to block a local wireless carrier that uses Huawei equipment for its 5G services from unspecified “sensitive areas.”

Washington considers Huawei, the world’s leading supplier of telecom gear and No. 2 smartphone maker, a security threat. Huawei has sought to alleviate those concerns and has rejected assertions that it would facilitate spying by Beijing.

It’s unclear whether Seoul would accept potential U.S. demands to block imports of Huawei products at risk of triggering retaliation from China, its biggest trade partner.

A U.S. business group reported Friday that its members’ operations in China are facing growing pressure from trade friction after the Trump administration imposed 25% tariffs on $250 billion in Chinese imports, with plans to extend those duties to another $300 billion — virtually all the goods America buys from China. /gg