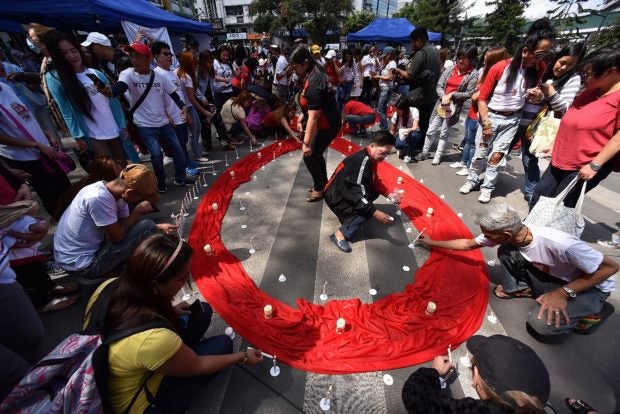 Baguio’s night club community and the city’s doctors on Friday (May 24) lighted candles surrounding a giant red ribbon that symbolizes the global fight against the disease. INQUIRER PHOTOS/ EV Espiritu

BAGUIO CITY — In memory of 33 AIDS victims who died, Baguio’s night club community and the city’s doctors on Friday (May 24) lighted candles surrounding a giant red ribbon that symbolizes the global fight against the disease.

Around 60 workers of the Baguio Association of Bars and Entertainment Society (Babes) joined the 36th AIDS memorial ceremony that the city health office organized at downtown Baguio’s Malcolm Square.

Baguio has 75 percent of the 490 AIDS patients documented in the Cordillera.

This compels the upland folk “to confront the reality that the disease reaches even mountain communities,” said Amelita Pangilinan, Cordillera director of the Department of Health.

In January, the city health office recorded 10 new AIDS patients in Baguio, raising the number of AIDS cases at the summer capital to 331.

Records show that 309 of the patients were male, although they may not necessarily be residents of Baguio or the Cordillera.

Some may have been residents of other towns, who were treated here, Pangilinan said. (Editor: Leti Z. Boniol)