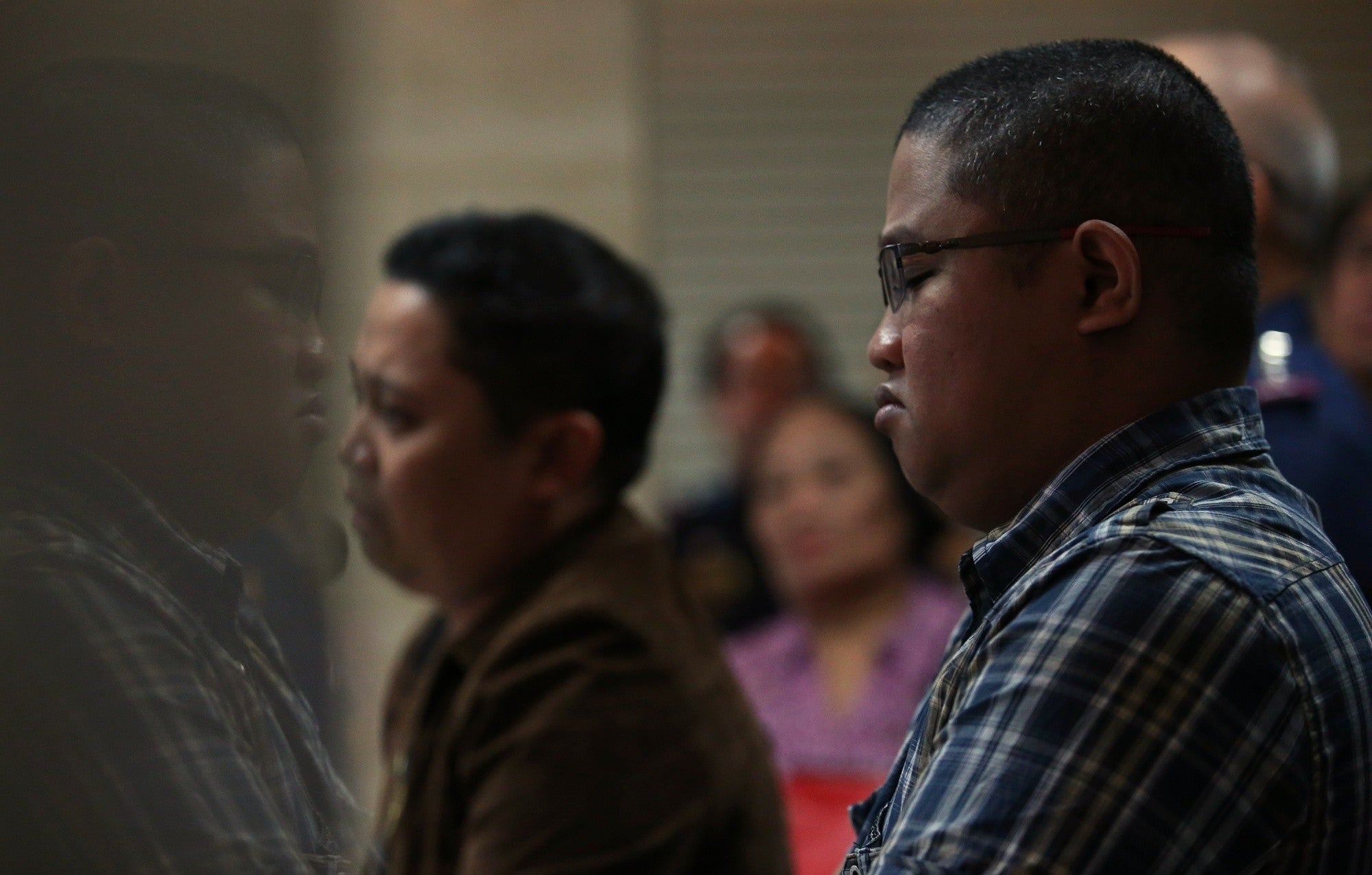 MAN WITH A CREDIBILITY PROBLEM Peter Joemel Advincula, at Philippine National Police headquarters on Thursday, tells journalists a new story that Sen. Panfilo Lacson says the authorities should properly assess because the man has a credibility problem. —LYN RILLON

Peter Joemel Advincula, who came forward on May 6 claiming he was “Bikoy,” the hooded man in the series of videos that linked members of President Duterte’s family to the illegal drug trade, appeared again on Thursday saying his claims were false and that the videos were part of a plot to unseat Duterte hatched by the opposition Liberal Party (LP) and Sen. Antonio Trillanes IV.

During his first appearance at the Integrated Bar of the Philippines (IBP) headquarters in Pasig City on May 6, Advincula repeated his allegations in the narcovideos that Duterte’s son Paolo, son-in-law Manases Carpio, and former special presidential assistant Christopher “Bong” Go were members of an illegal drug syndicate who had amassed millions in narcomoney.

He said he had no links to Otso Diretso, the LP-led coalition for the May 13 midterm elections, and that threats to his life and a desire to clear his conscience had driven him to come forward.

But on Thursday, facing reporters again, he retracted all the accusations he made in the videos, saying “[t]here is no truth to any of it, and it was all orchestrated by the opposition, which is LP, under the handling of [Trillanes].”

Advincula, who had admitted to being jailed for fraud, also linked opposition Sen. Risa Hontiveros and a member of the staff of detained Sen. Leila de Lima to the planning of “Project Sodoma,” the spearhead of a “mass movement” to topple Duterte from power and install in his place Vice President Leni Robredo, who would then pick Trillanes as her vice president.

Advincula surrendered to the Philippine National Police, which launched a manhunt for him shortly after his appearance at the IBP headquarters.

Advincula said he had been promised P500,000, absolute pardon and a job in the government for his cooperation.

But after the opposition lost the senatorial election, he said he began to fear for his life.

Advincula’s turnaround prompted a call from Paolo Duterte, a former vice mayor of Davao City who was elected to the House of Representatives in the May 13 midterms, for an investigation of all the people involved in the alleged plot against his father.

“Without a doubt, as I have said before, Sen. Antonio Trillanes was behind it. And now that many names have surfaced to include Sen. Risa Hontiveros and several lawyers, I believe a proper investigation is in order,” Duterte said.

His sister, Davao City Mayor Sara Duterte, said the retraction of Advincula proved that the “Bikoy” video series was a scam hatched by critics of the administration who deserved the beating they received in the just concluded elections.

“Bikoy is a scam created by people who oppose the Duterte administration,” she said. “This group is so disorganized they cannot even get to first base because the path to their objective is in disarray.”

Go, President Duterte’s former special aide who won election to the Senate in the midterms, said he was not surprised by Advincula’s retraction.

He said he had known from the start that the accusations in the videos were all lies and black propaganda.

Go said the campaign against Duterte had been going on since the 2016 presidential election.

“It’s sad to know that those who claim to be decent and clean are actually the ones trying to destroy other people. This is not the kind of politics I learned from President Duterte,” Go said.

Malacañang said it would wait for the results of the PNP investigation before commenting on Advincula’s retraction.

The Palace, however, said Advincula should substantiate his claims against the opposition.

“We would rather wait for him to substantiate his confession and revelations on the participation of certain [people] identified with the Liberal Party and the opposition with proof,” presidential spokesperson Salvador Panelo said in a statement.

“I do not know him. I have never spoken to him,” Robredo said. “There has never been any communication between us.”

“The witness will say any lies against the LP out of fear that he will be harmed by the administration,” Pangilinan said. “We have no link to the video and Bikoy. All these are lies and are fabrications of the administration.”

“The Liberal Party has nothing to do with the so-called Bikoy video. We deny the accusations. That the Liberal Party connived with an obviously professional con artist to topple the government is most absurd,” Drilon said in a statement.

“I urge the PNP to get to the bottom of this Bikoy issue and file the appropriate charges,” he said.

Trillanes denied Advincula’s allegations and said he would file charges against him.

“I deny the allegations of this Bikoy character. This could be another ploy of the administration to harass the opposition,” Trillanes said.

Hontiveros said she found it odd that the President’s allies were “quick to shoot down” Advincula’s credibility on May 6 and even threatened him with arrest.

“[But] now [that he is singing] a different song and [accusing] the opposition of outlandish things, all of sudden [he is credible]? How absurd,” she said.

Sen. Panfilo Lacson urged the PNP to “conduct [an] appropriate assessment” of Advincula’s allegations, noting that Advincula had a serious credibility problem.

Earlier, Police Gen. Oscar Albayalde, the PNP chief, said Advincula had tried to sell information to the authorities, but the information had always turned out wrong.

Advincula went into hiding after his IBP appearance and two courts issued warrants for his arrest for estafa and large-scale illegal recruitment.

He surrendered on Wednesday after discussions between his family and the Northern Police District (NPD).

NPD officers picked up Advincula from an apartment in The Grove in Pasig City on Wednesday and held him in an undisclosed location.

Advincula was presented to the press at PNP headquarters in Camp Crame, Quezon City, on Thursday before he was booked. —WITH REPORTS FROM JULIE M. AURELIO, PATRICIA DENISE M. CHIU, NIKKA VALENZUELA, KARLOS MANLUPIG AND ORLANDO DINOY