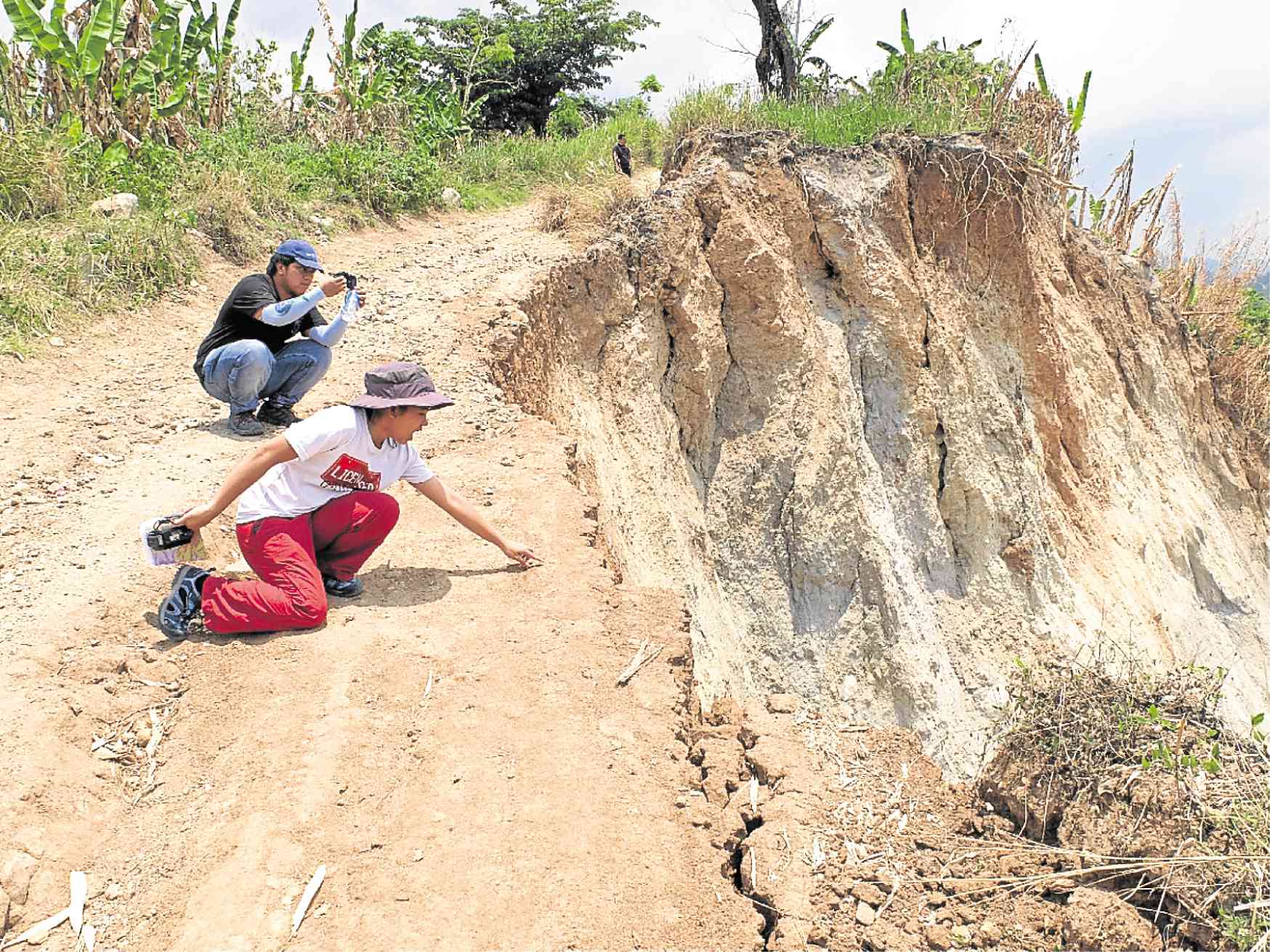 DANGEROUS PATH The road leading to Barangay Diaz in Porac, Pampanga, is accessible only by motorcycles and carabaos. The upland village is prone to landslides, prompting environment officials to recommend the relocation of Aeta families living there after a strong earthquake hit the province last month. —PHOTO COURTESY OF MGB CENTRAL LUZON

CITY OF SAN FERNANDO — Some 260 Aeta families have been advised to permanently move out of harm’s way as the Mines and Geosciences Bureau (MGB) tagged their villages as prone to landslides after the 6.1-magnitude earthquake on April 22.

Noel Lacadin, chief geologist of MGB in Central Luzon, recommended that Sitio Tagak at Barangay Nabuklod in Floridablanca town and Barangay Diaz in Porac town be considered “no habitation zone.”

“Severe ground shaking occurred [in the villages],” Lacadin told the Inquirer on Wednesday.

Both villages are within the 10-kilometer radius of Mt. Pinatubo, which last erupted on June 15, 1991 after a strong earthquake in July 1990.

Lacadin said he issued a landslide threat advisory to the local governments after the MGB and the Philippine Institute of Volcanology and Seismology conducted hazards assessments following the April 22 temblor.

Porac Mayor Condralito dela Cruz said 110 Aeta families from Barangay Diaz had moved to Barangay Babo Pangulo and then to Sitio Pangaralan there, about 3 kilometers away.

“They refused to return to Diaz. They claimed seeing a family buried by the landslide,” De la Cruz said.

Lacadin said cracks already formed on the only road in Barangay Diaz. The 150 Aeta families in Tagak refused to leave their village, opting to build sheds as they awaited relocation, according to Roberto Delgado, head of the local disaster risk reduction and management office.

A signboard has been put up in Tagak to remind the indigenous folk that the place is highly prone to landslides, Delgado said. 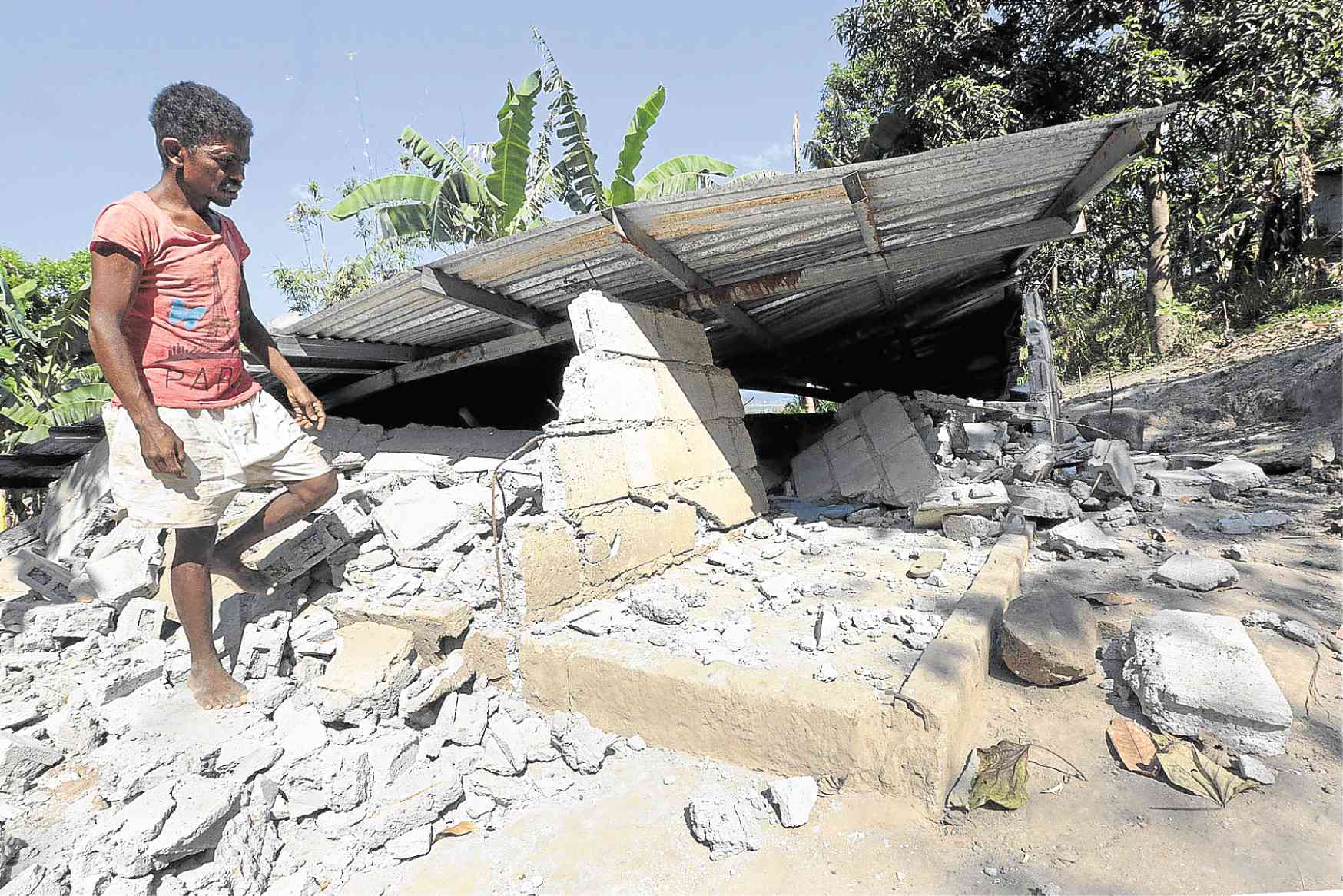 QUAKE DAMAGE An Aeta resident in Floridablanca, Pampanga, checks his house after it crumbled when a 6.1-magnitude earthquake struck in April. —GRIG C. MONTEGRANDE

The Philippine Air Force at Basa Air Base in Barangay San Jose is on standby for evacuation assistance.

The provincial government has negotiated to buy a 28,000-square-meter land as a relocation site for the displaced Aetas, according to Angelina Blanco, executive officer of the Pampanga Disaster Risk Reduction and Management Office.

The Aetas of Mt. Pinatubo used to roam the Zambales mountain range, changing abode after a death, illness or bad luck in the family or clan.

Lacadin confirmed that damming or ponding of water has occurred at a tributary of the Porac-Gumain River on the side of San Marcelino town in Zambales province. The water could flow toward Floridablanca should it burst open.