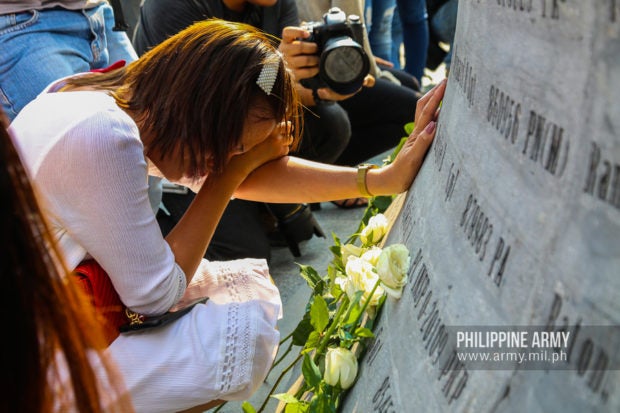 PHOTO from the Philippine Army

MANILA, Philippines — The Philippine Army honored the soldiers who died in one of the country’s most ferocious battles in recent memory.

The Marawi siege, the five-month-long battle between government forces and Islamic State-inspired terrorists, was remembered on its second anniversary on Thursday, May 23.

Active and retired commanders, personnel involved in the Marawi campaign, civilian employees, relatives of fallen soldiers gathered at a ceremony at the Marawi Pylon of the Libingan ng Mga Bayani.

“The Marawi siege will forever be etched in the minds of all Filipinos that the resiliency and determination of our soldiers prevailed over forces who are bent on destroying our democratic foundations. It is only fitting that we remember their bravery such that future generations can look back and see what sacrifice and patriotism truly mean,” said Army Commanding General Lt. Gen. Macairog S. Alberto.

Soldiers and relatives of fallen soldiers shared a picnic after the ceremony as they remembered the troops who offered their lives during the war.

The fighting left around 1,000 people dead, including 165 soldiers. Two years later, the displaced families have yet to return to their homes because the city remains in ruins. (Editor: Eden Estopace)