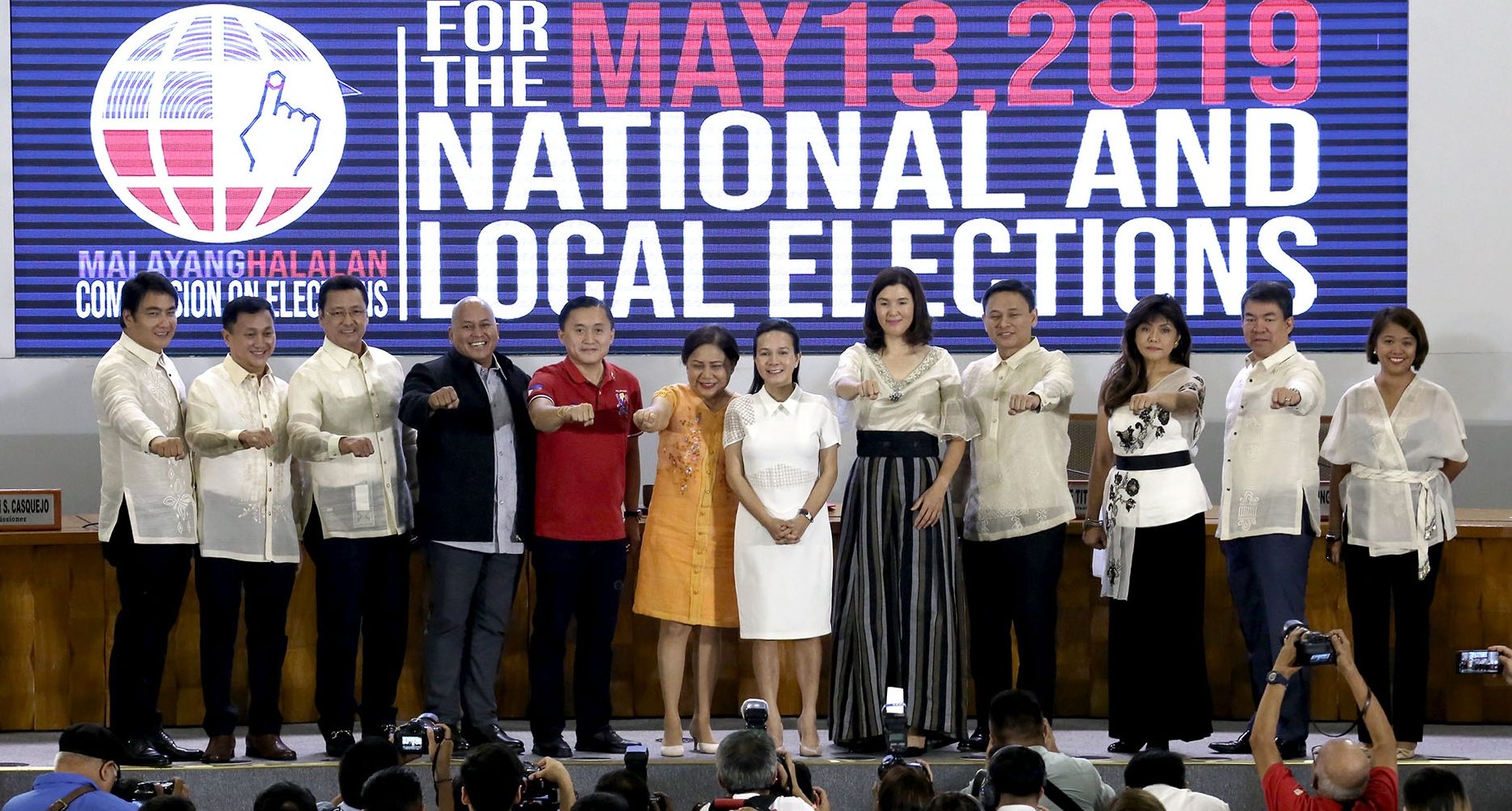 POLITICAL BODY LANGUAGE The 12 elected and reelected senators line up for the traditional picture-taking after their proclamation by the Commission on Elections. Reelectionist Senators Nancy Binay (extreme right) and Grace Poe (7th from left) stand out among their colleagues for not doing the “Duterte salute.” —RICHARD A. REYES

MANILA, Philippines — While they may have benefited from President Rodrigo Duterte’s support, the newly proclaimed senators allied with the administration gave assurance on Wednesday that their dominance in the Senate won’t turn the institution into a rubber stamp for Malacañang.

Senator-elect Francis Tolentino, the President’s former political affairs adviser, said the public should look at the Senate’s independence not through its individual members but its entirety.

“The Senate should always be viewed as an institution,” said Tolentino, a member of the ruling Partido Demokratiko Pilipino-Lakas ng Bayan (PDP-Laban).

Election officials proclaimed the winners of the race for the Senate after finishing the official count of the vote in the May 13 midterm elections overnight.

The tally had been delayed by glitches in automated vote-counting machines.

Nine of the 12 Senate seats at stake went to the President’s chosen candidates, while the rest went to independents, completely shutting out the opposition Liberal Party (LP), an electoral debacle not seen in decades.

Among the winners is the President’s former national police chief, Ronald dela Rosa, who enforced his brutal war on drugs that had seen police kill more than 5,000 mostly urban poor suspects since 2016, drawing global condemnation and accusations of crimes against humanity against the Philippine leader in the International Criminal Court.

Unless an unlikely realignment occurs, this means the Senate in the 18th Congress would see a minority bloc with just four members.

But Senator-elect Imee Marcos, daughter of the late dictator Ferdinand Marcos, said she didn’t believe the new Senate would simply follow the whims of Malacañang.

“There are a lot of us who are stubborn, including me. Also, there are independent senators, who we can’t say that are with the administration, have a debt of gratitude,” said Marcos, to whom the President said he owed a debt of gratitude for helping bankroll his campaign for Malacañang in 2016.

One of the election losers, Sen. Bam Aquino (LP), said he did not expect the Senate to remain independent under the dominance of the President’s allies.

Speaking to reporters on Wednesday, Aquino said the independence of the Senate was a “casualty” of the elections.

“The independence of the Senate will weaken because of the results of the elections. That cannot be denied,” he said.

What is certain at this point, though, is that the junior senators are already gunning for committees that they would like to head.

Tolentino, for example, said that as a lawyer, he would like to head the justice and human rights committee, currently headed by Sen. Richard Gordon.

Tolentino, however, may not get the committee, as Senate President Vicente Sotto III earlier said the chamber would observe the equity-of-the-incumbent rule.

This means Gordon would have to relinquish his post for Tolentino to get the chairmanship, held before Gordon by Tolentino’s rival who beat him in the 2016 senatorial race, Sen. Leila de Lima.

While not specifically saying what committee she wanted to head, Marcos said she would like to be part of the agriculture, trade and social welfare committees.

Another committee that Marcos is eyeing is ways and means, headed by Sen. Sonny Angara, who is poised to take over the finance committee to be vacated by outgoing Sen. Loren Legarda.

As for the administration’s legislative priorities, Tolentino said that matter had yet to be discussed by both the PDP-Laban and Hugpong ng Pagbabago, the regional party of Davao City Mayor Sara Duterte, the President’s daughter.

Earlier, Sotto said that given the victory of mostly proadministration candidates, it could be expected that the revival of the death penalty would be one of the measures that would be taken up in the next Congress. Dela Rosa himself had pledged to push for its passage.

Returning Sen. Ramon “Bong” Revilla Jr., who promised not to be a lackey despite running on the administration ticket, said the proposed revival of capital punishment needed thorough study.

“[From the start], I am prolife. But, of course, we have to consider the effects of the things some people do because there are those who are really abusive,” said Revilla, who was elected back to the Senate, winning the 11th seat, despite being accused of embezzling P224.5 million in government funds in the P10-billion pork barrel scam.

He said that even the President had admitted that the shift was difficult to achieve. “We need to educate our fellow Filipinos first about its benefits,” Go said.

The top vote-getter, reelectionist Sen. Cynthia Villar, thanked the President for his backing and asked for a round of applause for him in a speech after the results were announced on Wednesday.

Villar, however, indicated that she would not work solely for Malacañang.

“The laws we craft or legislate must consider all interests involved,” she said. “A strong and independent Senate has always been our goal.”

At the end of the ceremony, all senators-elect, except reelectionists Grace Poe and Nancy Binay, posed for a picture with their fists thrust forward, imitating Mr. Duterte’s signature clenched-fist salute.

Poe placed her right hand on her chest, while Binay raised her left hand and showed a No. 1 sign—for UNA, or her party, the  United Nationalist Alliance.

The President did not attend the proclamation, but Malacañang congratulated the winners and urged the losers to accept defeat.

“After a grueling battle, it is hoped that the protagonists lay down their political swords, accept the will of the electorate and bow to the majesty of their sovereign voice, by giving their preferred choices a chance of leading the country toward progress,” said Mr. Duterte’s spokesperson, Salvador Panelo.—With reports from Tina G. Santos, DJ Yap, Marlon Ramos, AP and AFP