Villar says advocacies, right messaging propelled her to No. 1 in ‘Magic 12’ 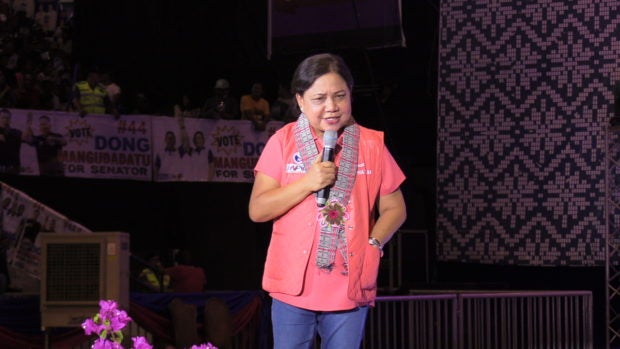 MANILA, Philippines — Reelected Senator Cynthia Villar has credited her advocacies and the effective messaging that went with it during her campaign for bagging the top spot in the “Magic 12” in this year’s midterm elections.

Villar finished strong with 25,283,727 votes, besting 61 other candidates for senator. Taking the second spot in the winning circle was reelectionist Grace Poe, who garnered 22,029,788 votes. Poe ranked No. 1 in the 2013 senatorial elections.

“I am happy and thankful for the electorate,” Villar told reporters Wednesday before being formally proclaimed winner by the Commission on Elections, sitting as the National Board of Canvassers, at the PICC Forum on Wednesday.

“They liked my advocacies, (especially) ‘yung ‘hanapbuhay,’ (and) the messaging that came with it,” she added.

Villar, who ran under the Nacionalista Party, was among the guest candidates of PDP-Laban, the President’s political party. She was also endorsed by Duterte-Carpio’s regional political party Hugpong ng Pagbabago. (Editor: Katherine G. Adraneda)